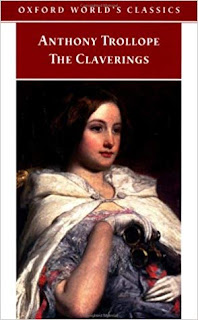 The Claverings, by Anthony Trollope

Now that my big paper is pretty much done, I can write proper blog posts again!  I read The Claverings on the bus between Chicago and Champaign, and then on the way back again.  I finished it in O'Hare airport, waiting for my flight.  And what a lovely read it was -- so absorbing that I didn't want to put it down!

This is one of Trollope's individual novels; not part of a series.  It was written in 1864, and did not appear until 1866-67, serialized in the Cornhill Magazine. (Imagine, a novel all finished and not being written even as it was being published!)

Harry Clavering is the son of a clergyman who is cousin to a baronet -- on the edges of, but not part of, the nobility.  Harry has been brought up to be a rich, idle clergyman too, but he decides to buck authority and become an engineer, building bridges and railroads.  He also wants to marry the lovely Julia Brabazon, sister to the baronet's wife; but Julia, though she loves Harry, has different ideas about how her career should go.  Marriage being the only career open to women, Julia has decided to do the thing "sensibly," in cold blood, and is going to marry an extremely rich, extremely dissipated earl.  Harry vows never to love again.

Over a year later, Harry is an apprentice engineer and has gradually fallen in love with his employer's daughter, Florence Burton.  She is not beautiful, but she is lovely in character, intelligent, and generally the flower of middle-class England.  Harry tends to despise her hard-working family just a bit.  And Julia is back, having nursed her awful husband through his death -- and his spiteful efforts to sully her name.  She is rich, but friendless.  Harry helps her a bit, and then finds himself re-enchanted by a still lovely, and now wronged, Julia.

So here is the problem of the novel: Harry has let himself drift into a serious problem.  Julia didn't know he was engaged and now hopes to reclaim her lost love.  Florence is honestly in love with him and trusts him completely.  And Harry doesn't have the faintest idea of what he should do: lose his honor and his job, and become Julia's rich husband?  Or stay true to Florence, and leave poor Julia in the cold?  Julia is prepared to fight for what she wants; Florence is not -- she's not going to beg.

Meanwhile there is lots of other family drama going on!  A sneaky Polish-French brother-sister duo have latched on to Julia.  The baronet is horrible to his poor wife.  The penniless curate wants to get married and doesn't seem to realize that he would need some income for that.  The baronet's doofy brother thinks it would be a good plan to marry Julia...

Oh, it's all such a good story.  Great stuff.  And throughout, Trollope is quietly showing Florence's middle-class family as the best England has got, and the nobility as...well, kind of second-rate.  Harry doesn't really quite deserve Florence.

Florence, on the other hand, is hard to get to know.  She's such a paragon: intelligent, self-respecting, calm, virtuous, etc. that the more turbulent Julia steals the stage.  I'd rather be friends with Florence -- I'd rather BE Florence -- but she didn't get enough time to herself.

It did feel kind of like Trollope painted himself into a corner by producing this difficult scenario with the baronet and his brother, and then had to figure out how to fix it!

I really did love this novel.  Trollope is so great, and fellow fans will enjoy this story.  I think I'll re-read this one someday!

I'm not sure how I can possibly finish my list of 20 books by September 3.  Things have just been so busy.  But I'm in the middle of Kalpa Imperial now, and I'm loving it!
20 books of summer English literature TBR challenge Victorian