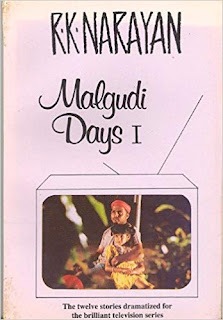 Here's another find from the great big university library.  This one just caught my eye as I was walking along; I didn't even look for it.  This shelf held several books published in India, in English.  (Actually, the library was crammed with Indian literature, but most of it wasn't in English.)  This was just a collection of the twelve Malgudi stories that had been turned into episodes of the TV series.

I'd read a couple of these stories before, but most of them were new to me.  I read the Penguin collection of Malgudi Days just a few months ago, but this was a different thing with little overlap.

I particularly remember a story about a little boy terrified to sleep away from his grandmother...and when he's forced to sleep alone, he accidentally catches a burglar and becomes a hero.   Another story features a family that promised to sacrifice their little boy's hair if he survived a dangerous...and now, twenty years later, it's about time they followed through, but the little boy isn't so little any more and he isn't thrilled with this plan!

I'd love to see the TV series made from these stories, and in fact it turns out that it's available on Amazon Prime!  So you can bet I'll be watching it.
Indian literature short stories