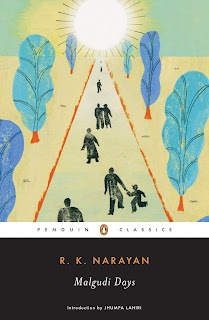 Here's one I've been wanting to read for a long time.  R. K. Narayan used to relax by writing short stories about the imaginary town of Malgudi.  It's an average town somewhere in southern India, full of just ordinary people  -- who all have compelling stories of their own.  These stories were written over 40 years.

Most of the stories are quite short, and tell about one particular person: a gardener, a retired official, a street vendor, a knife-sharpener.  Some of the more humorous tales are told by 'the Talkative Man,' who always has an odd episode to narrate, like the time he won a road engine at a fair, and the terrible consequences.  (A road engine appears to be something like a steamroller or a small locomotive; it's mechanical, huge, and takes skill to drive.)   A good number of the stories have ironic finishes, but not so many that it's tiresome.  They're often comments on Indian governance or culture.

I particularly remember stories about:

a little girl and a father who long to spend time together, but he has to work such long hours that he hardly gets to see her,
a stray dog that attaches itself to a blind beggar, who is able to earn a better living...but turns the dog into a slave,
a boy whose father deserts him, leaving their cobra and monkey behind,
an overly worried mother and her slacker son...

It's a lovely collection of stories, and I enjoyed it so much.  It presents a kaleidoscope of average, interesting, unique people that adds up to a portrait of India.
Indian literature short stories