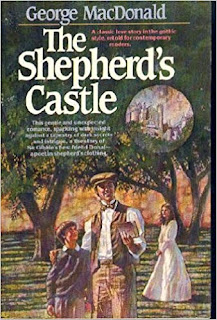 The Shepherd's Castle, by George MacDonald

You may well know of George MacDonald, a Scottish minister who wrote a lot of books and was a great inspiration to C. S. Lewis.  He wrote some children's fairy tales that are real classics, such as At the Back of the North Wind and The Princess and Curdie, and he wrote a couple of fantasy novels, Lilith and Phantastes, that are very strange indeed and must-reads for those interested in pre-Tolkien fantasy literature.  MacDonald also wrote a stack of realistic, romantic novels that have practically disappeared, except for the most well-known, Sir Gibbie.  (I have an old copy that had disappeared, but I just found it again!)

Well, interesting things come across the donation table, and one was a copy of one of these romantic novels, The Shepherd's Castle, in a 1983 reprint from Bethany House; they published four of these stories.  This one is a companion to Sir Gibbie.  Now that we have all that background...

Donal is a young man from a shepherding background who has been fortunate in obtaining an education, and he's looking for a job.  He becomes a tutor to a little boy, younger son of an earl; a lady cousin, Arctura, owns the estate, but she has always let her uncle run it.  The castle holds secrets!  Ghostly music plays when the wind blows, there's a legend of a lost room, and the earl has a serious drug habit.  Using the power of common sense, Donal, Arctura, and little Davie explore the roofs and find the source of the music.  It's up to Donal to figure out the rest of the mystery and protect Arctura from an increasingly unbalanced and angry earl...

I enjoyed this story a lot; it was really fun, although it comes with an unnecessarily tragic ending.  It's much as though a Three Investigators book were written by a very religious Victorian.  MacDonald must have been an enemy of old-school Scottish Presbyterianism; Donal, an ideal young Scot, teaches Christianity in a very different fashion that raises a lot of hackles.

So, a fun read that put me in the mood to stay in Scotland, literarily speaking.  Maybe it's time to start that Boswell.