Memoirs of the Crusades 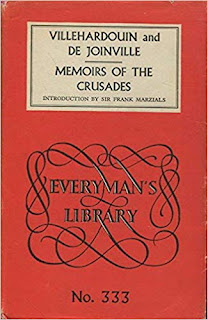 Memoirs of the Crusades, by Geoffroy de Villehardouin and Jean de Joinville


I've had this kind of ancient Everyman paperback book on my shelves forever, and it's high time I got around to reading it.  The trouble is, while I love medieval literature, I find war stories -- that is, accounts of battles -- to be fairly boring, so it was hard to pick up.  But really, these memoirs were pretty fun to read and contained some entertaining moments amid the incredible misery of Crusader life.  Neither Villehardouin nor de Joinville are all that interested in recounting miseries; they skim over a lot of that.  Being in charge probably helped that part too.

Both of these men were French (Franks, in their terms), and highly placed in their homelands and in the crusading hierarchies.  They served in different crusades and went to completely different locations, and neither of their crusades accomplished the stated goal of conquering Jerusalem (again).

Villehardouin was Marshal of Champagne, and served as an ambassador to Venice at the start of the Fourth Crusade, joining at the very start in 1199.  Off he went to Venice to commission a fleet of ships, and all went well until a zillion Crusaders showed up and couldn't pay the agreed price for the fleet.  The Venetians proposed a solution: get Zara (A Croatian city they were always fighting over) for us and we'll call it even.  So off most of the Crusaders went to conquer Zara, which wasn't exactly Crusading but it seemed like a good idea at the time (well, the Pope didn't agree and excommunicated them all, but never mind).  And then they started for Jerusalem.

But!  On the way, young Alexios, crown prince of Constantinople, showed up asking for help.  His uncle had usurped the throne, blinded the king, and thrown him in jail.  Alexios offered a deal: help me get my father back on the throne, and we'll pay you back with supplies and money for the Crusade.  Well, this seemed like a fine plan and very righteous, since God doesn't approve of usurpers, so off they went to Constantinople, where they promptly got mired into an utter mess of local politics.  Alexios got the throne but didn't want to pay, there was a popular uprising, the Crusders decided to just conquer the place....and they never did get past Constantinople.

The whole story reads like one of those quest video games where you can get caught in endless side quests until you forget what exactly it was you were going to do.  Villehardouin spent years and years at all this; the Fourth Crusade lasted (officially) 1202 - 1204, but this story covers much more time than that, and I don't think Villehardouin ever went home, though he lived until at least 1209.
_________________________________

Joinville is really writing a biography of his king, Saint Louis (Louis IX of France), but much of it takes place during the Seventh Crusade (1248 - 1254).  Joinville served as seneschal of Champagne, and was a close advisor to the king during the crusade.  Louis was extremely pious, and seems to have been about the only king who wanted to go crusading that year, so he got it all together himself and simply poured money into the venture.  A Crusade was the money pit to rule all other money pits, and would eat every bit of treasure anybody had.

First they went to winter on Cyprus and talk with other eastern leaders about what to do.  Everybody wanted help -- Templars in Syria, Latins in Acre, and so on -- but Louis, confusingly, wanted to go to Babylon in Egypt.  Babylon is what the crusaders called Cairo.  Louis figured that once they had Babylon, with all that grain and wealth, it would be a good place to launch to Jerusalem.

Naturally, it all turned into a muddle.  Fighting with the Saracens (Egyptians), allying with Mamluks, mostly getting taken prisoner or getting very sick.  The best Louis could manage was to garrison Acre a bit.

All that is not really the focus of the story, though, which is all about how great Louis is, plus Joinville's personal experiences.  Joinville got taken prisoner, and there are various stories about inside politics or family matters, and some local color too:


[about the Nile and where spices come from]    Before the river enters into Egypt, people who are accustomed so to do, cast their nets out-spread into the river, at night; and when morning comes they find in their nets such goods as are sold by weight, and brought into the land,  viz., ginger, rhubarb, wood of aloes and cinnamon. And it is said that these things come from the earthly paradise; for the wind blows down the trees in paradise, just as the wind blows down the dry wood in the forests of our own land; and the dry wood of the trees in paradise  that thus falls into the river is sold to us by the merchants. The water of the river is of such a nature, that when we had put it into white earthenware pots that are made in the land, and hung it to the ropes of our pavilions, it became, in the heat of the day, as cold as if drawn from a well.

The food they [Saracens] gave us was fritters of cheese roasted in the sun so that worms should not come therein, and hard-boiled eggs cooked four or five days before; and these, in our honour, had been painted outside with divers colours.

While the king was at Sayette they brought him a stone that broke in flakes, the most marvellous stone in the world; and when you scaled off one of the flakes, you found, between the two stones, the form of a sea-fish. The fish was of stone; but it wanted nothing in form, eyes, bones, nor colour, nor anything else, to make it otherwise than if it were alive. The king gave me one of these stones, and I found therein a tench, brown of colour, and of such fashion as a tench ought to be.

I also found out a little more than I wanted to know about Louis' health, as he insisted upon going out with his men in this condition:


...because of the condition of his body, which was afflicted by several diseases, for he had a double tertian fever, and a very sore dysentery, and the special sickness of the host in his mouth and legs.  [Tertian fever seems to be malaria, but I don't know what 'sickness of the host' means.]