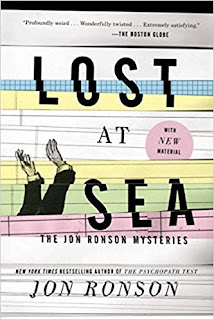 Lost At Sea: The Jon Ronson Mysteries, by Jon Ronson

Here's the second half of my Jon Ronson spree.  This is a collection of pieces that, as far as I know, all appeared elsewhere before being collected.  They're pretty random; from stories about artificial intelligence to Stanley Kubrick to the injustices home chemists can face, Ronson will follow anyone and chronicle anything interesting.  How about Indigo children?  Sylvia Brown?

The first piece is about the Insane Clown Posse, who I hadn't heard anything about in years, but guess what, they announced some time back that they are devoted Christians!  Foul-mouthed Christians who rap about extreme violence, but Christians nonetheless.  They were disappointed by the reaction they got.

I had fun with a hysterical piece written for Ian Fleming's 100th birthday, in which Ronson talks himself into a sponsored road trip that re-creates James Bond's road trip in Goldfinger.  This is from London to Geneva in an Aston Martin DB3.  Ronson claims to be uninterested in cars, but does eventually realize the joys of effortlessly driving 100mph.  Sadly, he doesn't get to drive the car straight on to an airplane to fly to France, but has to take the ferry.  Also, it turns out that while fictional Bond is capable of eating large amounts of rich food and swilling it down with a truly incredible amount of alcohol while also spending two days sitting in a car, a real person is not.

There's a really strange story about a long-beloved BBC announcer fellow who got a little too into the story he was telling about euthanasia, and confessed to mercy-killing a boyfriend on television despite not actually having done any such thing.  I guess euthanasia was kind of a theme, because much further on, there was a piece about a guy who helps people commit suicide.  Usually they are the people that the mainstream euthanasia advocates won't touch.

North Pole, Alaska, is a town that wants to be known as Santa's home.  It's Christmas all year round at North Pole, which some people love, but it sounds awful to me (and several residents seem to agree).  Ronson wants to understand North Pole, and also to understand why a group of 13-year-olds would hatch a plot to commit a mass shooting.

Did you know that the amount of credit-card junk mail you get is directly based on what kind of person they figure you are?

One quite long story focused on Jonathan King, who I had never heard of, but who was hugely influential in British pop in the 70s and 80s.  He 'discovered' bands like Genesis and so on.  And he also hung out in discos, doing market research.... and plying teen boys with alcohol and then molesting them.  His trial started in 2001 and it was a big deal in Britain.  The age of consent in the UK is 16, which may be all well and good when it's teens, but also gives a jaw-dropping amount of leeway to adults willing to pressure kids into sex.  Some of the events described in this story are plain rape, but if boys were 16 or older, it didn't seem to matter; those were dropped.  And Ronson spends a dismaying amount of time musing upon whether it's homophobic to put famous men in jail for molesting 14 and 15-year-old boys when famous men get away with sleeping with 15-year-old girls fairly regularly.  (I would suggest that this reflects perhaps not so much homophobia as a total lack of care for teen girls.  It's no excuse that this was written 15 years ago; when I was in high school long before that, the coach who molested a teen athlete went to jail.)  But there's no doubt that King committed the crimes, and so he got a guilty verdict and went to jail.  Gaol, I guess.

It's a collection packed with interesting and odd stories.  I was gripped, I learned interesting things, I would recommend it.
non-fiction