By Jean - December 18, 2018
It's about time I started signing up for 2019 challenges!  I am pretty sure that I will not be able to read as much as I want to in, at least, the spring semester of 2019 (I will be working a good deal more), so I'm going to try to go pretty easy.  That means that I'll still sign up for things, but I'll sign up for lower levels and not expect too much of myself. 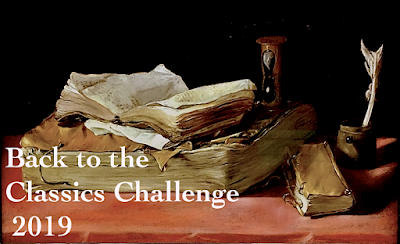 That said, here's a perennial favorite of mine: Back to the Classics, hosted by Karen of Books and Chocolate.  Karen says:

3. Classic by a Female Author.

4. Classic in Translation. Any classic originally written in a novel other than your native language. You may read the book in your native language, or its original language (or a third language for all you polyglots!) Modern translations are acceptable, as long as the book was originally published at least 50 years ago. Books in translation are acceptable in all other categories as well.

5. Classic Comedy. Any comedy or humorous work. Humor is very subjective, so if you think Crime and Punishment is hilarious, go ahead and use it, but if it's a work that's traditionally not considered humorous, please tell us why in your post.

6. Classic Tragedy. Tragedies traditionally have a sad ending, but just like the comedies, this is up for the reader to interpret.

7. Very Long Classic. Any classic single work 500 pages or longer, not including introductions or end notes. Omnibus editions of multiple works do not count. Since page counts can vary depending on the edition, average the page count of various editions to determine the length.

8. Classic Novella. Any work of narrative fiction shorter than 250 pages.

9. Classic From the Americas (includes the Caribbean). Includes classic set in either continent or the Caribbean, or by an author originally from one of those countries. Examples include Their Eyes Were Watching God by Zora Neale Hurston (United States); Wide Sargasso Sea by Jean Rhys (Jamaica); or One Hundred Years of Solitude (Columbia/South America).

10. Classic From Africa, Asia, or Oceania (includes Australia). Any classic set in one of those contents or islands, or by an author from these countries. Examples include Palace Walk by Naguib Mahfouz (Egypt); The Makioka Sisters by Junichiro Tanizaki (Japan); On the Beach by Nevile Shute (Australia); Things Fall Apart by Chinua Achebe (Nigeria).

11. Classic From a Place You've Lived. Read locally! Any classic set in a city, county, state or country in which you've lived. Choices for me include Giant by Edna Ferber (Texas); Sister Carrie by Theodore Dreiser (Chicago); and Buddenbrooks by Thomas Mann (Germany).

12. Classic Play. Any play written or performed at least 50 years ago. Plays are eligible for this category only.

Some of these are tricky!  I'll have to find a tragedy and a comedy that are not plays, and I might have to read some Steinbeck for that 'place I've lived' category.  (Are there any classics set in Berkeley?  Chico?  Hmmm)

As usual, I won't be picking out books ahead of time, and I may wind up only hitting six or nine rather than all twelve as has been my habit.