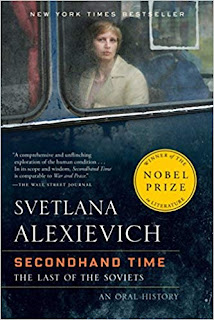 Secondhand Time: The Last of the Soviets: An Oral History, by Svetlana Alexievich

Wow, this book is...an achievement.  Alexievich won the Nobel Prize in Literature, and it was well-deserved.  It's not a regular book of history; it's more like a monument, really.

What Alexievitch does -- has been doing for well over twenty years -- is interview people and transcribe their stories.  Mostly just ordinary people, and the stories are not edited much.  They're just set down.  The result is very immediate; you can almost see the people as they speak.

Many of the people in this book are elderly, and tell of long Soviet lives.  Others are quite young and may not even remember Soviet life.

There's a former Soviet officer, who offers the rather stunning information that a good 70% of the Soviet economy was militarized, and in his opinion that was only correct.  They weren't about to convert tank factories into factories for toasters!  They had to be ready at all times.

There's a lady who spent her infancy in the gulag, and her childhood in the orphanage down the road.  Other people who were convinced and happy Communists and can't get used to the new situation.  Lots of them wanted more freedom to read and speak, but the economic chaos of the 1990s was horrible for just about everyone.  Many people comment that they thought they'd get more books, salami, and freedom, and instead everything is about money, materialism, and bling all the time.  (I have to say, the West really screwed over the Russians with this whole 'shock therapy' thing.  What a mess.)

Sometimes she just collects random snippets, bits and pieces from the crowd on the street (as in the protests against the coup attempt against Yeltsin) or kitchen conversations at dinners, as everyone expresses different opinions.

What an exciting time!  I handed out flyers in the subway...Everyone dreamt of a new life...Dreams...People dreamt that tons of salami would appear at the stores at Soviet prices and members of the Politburo would stand in line for it along with the rest of us.  Salami is a benchmark of our existence.  Our love for salami is existential...

War is a swamp, it's easy to get stuck in it and hard to get out.  Another Jewish saying: "When the wind is strong, the trash rises to the top."  [This is from a man who was a boy during the war and joined the partisans in the woods after he was left for dead in a mass Jewish grave.  The partisans were anti-Semitic too, but it was the only place he could be at all.]

The devil knows how many people were murdered, but it was our era of greatness.

For us, communism was inextricably linked with the Terror, the gulag.  A cage.  We thought it was dead.  Gone forever.  Twenty years have passed...I go into my son's room, and what do I see but a copy of Marx's Das Kapital on his desk, and Trotsky's My Life on his bookshelf...I can't believe my eyes!  Is Marx making a comeback?  Is this a nightmare? [snip] Marxism is legal again, on trend, a brand.  They wear T-shirts with pictures of Che Guevara and Lenin on them.  [Despairingly.]  Nothing has taken root.  It was all for naught.

It's just this enormous array of different lives, placed next to each other for observation and perhaps comparison.  It's not at all an easy read; looking back at the dates on Goodreads, it took me nearly two months.  Most of the stories are harrowing in one way or another, and it's a lot to deal with.

For anybody interested in Soviet history, this is a must-read, as are Alexievitch's other books.  In fact, now she's got another book out.  She writes faster than I can deal with.  I will never catch up.
20 books of summer chunksters history Russian literature WIT August