Summerbook #15: Paradise of the Blind 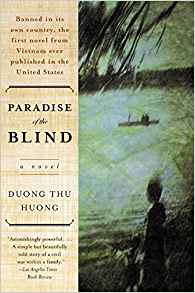 Paradise of the Blind, by Duong Thu Huong

This is truly an amazing novel; beautifully written and hard to put down.  It was also banned in Vietnam and the author imprisoned for her writing, which was -- even in a time that was supposed to be welcoming to dissent -- too directly critical for the government's pleasure.  As a young woman, Duong was part of the North Vietnamese Communist Party (she was exactly the age to be a young enthusiast during the war), but became disillusioned and spent the 1980s writing and speaking about what she had witnessed.  She was expelled from the Party and imprisoned for a while, and then released and simply not allowed to travel for years.  In 2006 she moved to Paris, where she still lives today.

Hang, a young woman living in Russia as an 'imported worker,' receives a telegram summoning her to Moscow to see her uncle, a cadre leader.  As she travels on the train, she ponders on her family's history in episodes that jump around in time, eventually giving the reader a full portrait of a family torn apart by war.

Hang's mother had married a young man very slightly wealthier than she was; his family owned a few acres of rice paddy and hired help at harvest time.  This was enough to earn the enmity of her brother Chinh, a rising young official who made it his mission to dispossess the family of their bit of land.  The young husband died, and his sister made it her life mission to amass wealth and save it all for baby Hang, in whom all her hopes resided.  Meanwhile, Mom scraped a meager living in Hanoi as a market trader, constantly subject to Chinh's harangues, and yet still supporting him with food and money.  While Aunt Tam lived only for Hang, Mom lived only for Chinh's little sons.

Hang grows up craving the love of her distracted mother, and constantly subject to her uncle Chinh's demands.  Her life -- and the lives of all around her -- is deformed by the ever-shifting, impossible demands of Communism, which visits violence and destruction on her beloved home and eventually forces her out.  Only a final help from the eccentric but loving Aunt Tam (who comes with her own demands in the form of extravagant generosity) makes it possible for her to return.


One really interesting interlude in the novel is at a huge feast given by Aunt Tam, who is by now a force in the village by virtue of her personality.  One of the women helping doesn't want to serve a village official, because he's trying to steal her relative's land (and thus livelihood).  Tam tells her not to worry, and then proceeds to stage an evening of storytelling, regaling the officials with tales of just and unjust magistrates of the past.  It's highly successful...for the moment.  But eventually, nothing can stop a corrupt government from victimizing whoever it wants.

There is a lot about food, smells, landscape, and physical environment.  It's a very tactile novel, and written by somebody who loves her home.