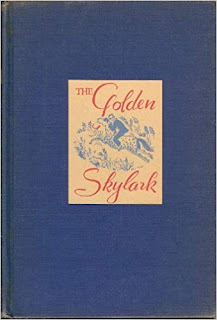 The Golden Skylark, by Elizabeth Goudge

During my week away, I was living in a great big university library, so naturally I went and hunted up books I didn't have access to at home.  Most of them were for work, but I did sneak in a few fun books for when my brain couldn't think about academic research any more!  I looked up Elizabeth Goudge in the catalog and was quite thrilled to see two or three titles I'd never read.  This was the one I picked to read.

The Golden Skylark is a collection of short stories, and the dedication -- to a girl "who loves England" -- is a clue to the theme.  All of the stories take place in Great Britain.

There are historical stories about famous people, starting with "The Golden Skylark," about the poet Shelley as a young man and the origin (I presume fictitious) of his skylark poem.  There is a story about Sir Thomas More and his children at the time of More's arrest, and another about a teenage Princess Elizabeth meeting Jane Seymour for the first time.  There's also one about Shakespeare's 'dark lady.'

Sprinkled throughout the collection are charming tales about the du Frocq family on the isle of Guernsey, in which the children get into various kinds of mischief, with interesting results.

There is also a tale about a Scottish castle and the children who belong to it, and another of two elderly ladies, their treasures, and an old rogue named Jenkins.  Oh, and one about a shopkeeping lady's two treasures and the boy and girl who wish to buy them.

It's a beguiling little collection of stories; highly recommended for Goudge fans.  Reminds me a bit of Eleanor Farjeon's stories, too; I think if you like one you'll also like the other.  Lucky me to find it in a library collection!