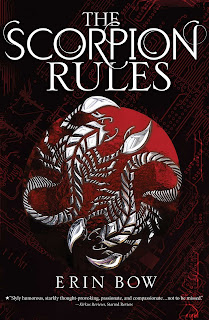 The Scorpion Rules, by Erin Bow

I really liked Erin Bow's first book, Plain Kate, so when I figured out that this book everyone was talking about was by Erin Bow, I finally went and got it.  It lived up to the hype, too!

Hundreds of years in the future, the world is kept mostly at peace by a hostage system: if you plan to rule a country, you must give up your child.  If you go to war (or are attacked), the child dies.  Talis, the super-computer that took over ruling the world when it decided that people were no good at it, is very strict about this.

Greta is the crown princess of the Pan-Polar Confederation (mostly Canada) and she has lived most of her life at the Precepture school with the other hostage children.  She is prepared to die if necessary, but hopes that with her 18th birthday only months away, she'll live to leave the school and become an adult.  When a new hostage, Elian, arrives, he is in no way accustomed to living according to the strict Precepture rules and the whole class is frequently punished for his rebellion.  Elian's grandmother runs a neighboring country and it looks very much as though neither Greta or Elian will live to see eighteen.

This is a really suspenseful story that keeps moving and has lots of great stuff in it to think about.  The politics are complex, the action rarely stops, and Bow does not do the expected with teen romance.  Even if you don't read a lot of YA, this is one worth getting, and I'm looking forward to the sequel, The Swan Riders.


I do have one beef with the world-building, though.  This is hundreds of years in the future, when the world's population is less than a billion (lots and lots of wars) and everyone lives, by necessity and force, in a frugal, eco-sensitive kind of way.  Food is grown locally, much of industry is given over to very high-tech methods of resource extraction from ruined areas, and so on.  Everyone is heavily focused on water; they use much less than we do per person, but it's scarce in most countries.  OK, so, if they're so much more technologically advanced than we are, why haven't they built way more water purification plants and desalinization plants?  We waste a lot of water and mostly don't bother to invest in cleaning it, but if we acted more responsibly, we could do a lot better.  If these future folks are so much better at it and need so much less, why haven't they figured out water?  It seems like the water problem is there to give them a reason to fight, not because it's a natural result of the conditions they live in.
SF/fantasy YA lit