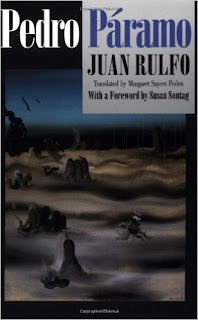 As I've confessed several times here, Latin American literature is one of the things I'm not very good at.  So I purposely put a few titles on my Classics Club list, so that I would jolly well have to read some.   Several of those didn't work out as I hoped, so I've done some switching around as I've learned a bit more, and this is one of my replacement titles.

Juan Rulfo, besides being mentioned in the Shiki Nagaoka book I wrote about the other day, became a major literary figure in Mexico in the 1950s.  His surrealism, vivid imagery, and inclusion of magic in his novels was a new departure in Latin American literature and was a large part of the movement to magical realism that is so well-known.  So here we go, one of the earlier works of magical realism:

He is traveling to Comala, his mother's home village.  She is dead, but told him that his father, Pedro Páramo, was there.  The village is empty now -- nearly all the people are gone -- but his mother's friend puts him up for the night.  Except she isn't there either; Comala is now populated exclusively by the dead.  At first, we just catch little vignettes as the Comala ghosts show us their former lives.  Then we're drawn deeper in, even into the graves themselves as people converse between coffins and rehash events.  Eventually we know Pedro Páramo's story, which is also the story of Comala.

An interesting novel and a fairly short and easy read, for magical realism, so not a bad way to get started in the world of Latin American literature (in case you're trying to learn about it too.)