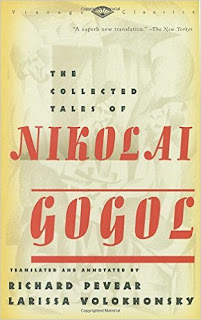 Collected Tales of Nikolai Gogol, translated by Pevear and Volokhonsky

Gogol wrote a whole lot of short stories, and he kind of did it in two phases of his career.  He started off in Ukraine, so the first half of the stories are called "Ukrainian Tales."  The second half are the "Petersburg Tales," written in the city.

Ukrainian tales are mostly pastoral; they take place in villages and on farms, unless someone treks off to Kiev.  They're a bit folky in flavor, and frequently have some supernatural element.  I really enjoyed most of these stories, especially "The Night Before Christmas," where a proud village girl tells her swain that she won't marry him unless he brings her a pair of boots just like the tsaritsa wears -- and so off he goes to do it.  And there was a melancholy, highly realistic story about two neighbors who were the best of friends, until a chance word causes offense, and every time they get close to reconciling, they choose to insult each other again.  It ends up consuming their lives instead of enriching them.

The Petersburg tales are about more sophisticated people -- shopkeepers or officials or young ladies -- but they're human just the same and the trademark Gogol comedy is more in evidence here.  "The Diary of a Madman" is mostly sad, as a minor official slowly loses his grip on reality.  He develops a crush on his boss' pretty daughter, and believes that he can hear her lapdog conversing with other dogs  "The Nose" is Gogol's most famous story, as an official's nose takes a vacation from his face and is seen around town.   "The Portrait" is a disturbing supernatural story that I thought was very good, and "The Overcoat" is another famous tale, the story of a poor clerk who finally saves up enough to have a new overcoat made, with larger consequences than expected.

It took me a good long time to read this collection, but it was very well worth it.  The stories aren't really very difficult to read, but they do take concentration (for a modern American at least), just because they're set in 1840s Russia.  I tried to read each story in one sitting, or at least in one day, and I enjoyed them pretty well.
Russian literature short stories TBR challenge