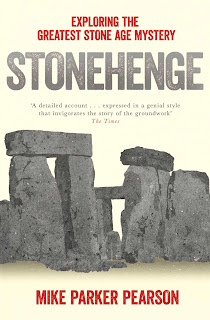 Wow, this is a great book!  Before I start, let's note that while I read the UK edition (purchased at Stonehenge), the US edition has a slightly different title, and that's what I've linked to above.  I made sure it was the same book, though.  OK...

From 2003 to 2008, archaeologists carried out an extensive campaign of digs around the Stonehenge area; their goals included figuring out how Stonehenge fit into the surrounding landscape and clarifying certain points about the monument itself, including the chronology.  They wound up discovering a tremendous amount, and this book, written by one of the project leads, explains their hypotheses, what they discovered, and his thoughts about what it all means.  It was a fascinating read and I highly recommend it if you are interested in this sort of thing.  And it even starts with a good story!

Pearson has another archaeological friend who is from Madagascar, and when he saw Stonehenge and environs, his thoughts were that the meaning of all this was quite obvious.  Wood is for living people, and stone is for the dead.  This sparked some ideas with Pearson, and he started looking around the Salisbury plain area to see if he could figure out how Stonehenge was situated in the larger landscape.  He wound up planning a large, multi-year dig that would spot-check several different places, including the almost unexplored Durrington Walls remains.  There, they discovered Neolithic houses and all sorts of things.

Pearson spends much of the book talking about everything but Stonehenge, especially Durrington Walls.  He explains the whole area--cursuses, long barrows, round barrows, wood henges, avenues, and how they all fit together.  Long barrows came first, but they were quite old-fashioned by the time Stonehenge was built.  Then he spends long chapters investigating the origins of bluestones (really cool stuff) and the more local sarsens that nobody ever seems to worry much about.  There is a long piece on Stonehenge Avenue, and why it is laid out the way it is.  In fact, he thinks he's figured out just why Stonehenge is where it is, which turns out to be a pretty compelling argument.

This is a great book, filled with newly-gleaned information about the British Neolithic era that stresses Stonehenge's place within the larger landscape -- it didn't just stand there all by itself.  It's also a highly detailed book, so be prepared for plenty of descriptions of postholes and scatterings of bluestone chips.  In fact, one thing that really stands out is how much it is possible to figure out from dirt and rocks and ashes if you are incredibly careful and accurate about digging.

I enjoyed it a lot.

NB:  A fun fact I learned -- we all know that pagans often go to Stonehenge at the summer solstice.  It's actually open to the public then, and Pearson says about 37,000 people show up.  But what I didn't know was that it's also open to the public on the winter solstice -- and only a few hundred go then.  If you're in the UK, I think you should go in a couple of weeks.  I certainly will if I ever get the chance!