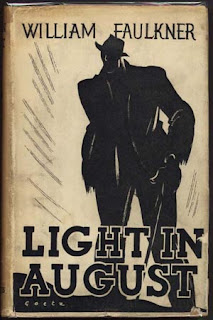 Light in August, by William Faulkner

Wow, I really hated this book.  I hated it so much that I had to assign myself to read 50 pages a day, and I was determined that I would not let Faulkner beat me.  I was going to beat him.   But then the election happened, and I still had 150 pages to go, and I couldn't do it.  The world is quite difficult enough, it turns out, without subjecting myself to Faulkner as well.  So I quit.

The story starts with a girl walking and hitching rides out to where she hopes to find the father of her impending baby.  She's about to give birth, her brother threw her out, and she has every faith that she will find her man and things will work out for them.  The man, of course, has changed his name and gotten involved with the illegal moonshine trade, and just as she arrives, he's found in a burning house with the murdered owner upstairs.

The murderer is Joe Christmas, an orphan who may or may not have some black ancestry.  He's obsessed with the possibility, and most of the novel is given over to his life story.

Mostly, it's horrible people doing horrible things to each other.  So I quit.  And I'll be perfectly happy never to pick up another Faulkner novel again.  He seems to have been a horrible person anyway.
American literature CC Spin