By Jean - December 20, 2016
I've been running around doing Christmasy stuff (and having a cold, fooey), so I might as well write a post too!  Lois at You, Me, and a Cup of Tea found this fun tag, and I thought I'd play along. 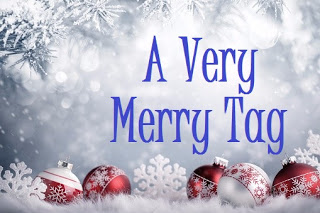 Does it snow where you live around Christmas?

Ha ha, nope.  We got a light dusting 15 years ago.  I live in the central valley of California and we don't get snow, but on the other hand I live quite near the foothills of the mountains, and they do.  So it's not very far to drive.

Do you get a real tree or a fake tree?

We used to always get real trees from Grandpa's Christmas Tree Farm (that is, my parents' back acre, which has a planting of pine trees).  They were always huge and sprawly things and it was pretty awesome, but the back acre has run out of trees that look halfway acceptable in a living room -- it's more like Hansel and Gretel's forest now -- and a few years ago the clever siphon arrangement we had slipped and we had a flood, so now we have gone fake.  This is our third year as a fake Christmas tree family.

What is your favorite Christmas movie?

Confession: I am super-bad at liking Christmas movies.  When I was a kid, we barely watched them and so I didn't develop any fondness for the Rudolph movie or anything.  Some of them I didn't see until I was an adult, and I still haven't seen Elf.  I do love Hogfather, and the Muppet Christmas Carol, and I'm a Nutcracker fiend but really picky about it.

Where in the world would you like to spend Christmas the most?

I can think of a lot of great places to spend Christmas!  If I was in the UK, I could go to Stonehenge on Midwinter Day and stay in a country house (and shiver in the cold and damp).   If I was in Germany, I could go to a Christkindlmarkt!  If I was in Denmark, I could have stars in the windows and lots of snow, maybe, and familiar carols and watch Nissebanden i Grønland.  Wait!  Nissebanden i Grønland is my favorite Christmas movie!  But it isn't a movie at all, it's a 24-episode series--a TV Advent calendar, about the elves who travel to Greenland to help Santa (Santa lives in Greenland, you know), but he's missing!  So they have to produce Christmas themselves.  (To see the intro-song part of the video, skip to 00:42.)

Of course I'd have to take my family along.

Which fictional/literary character would you most like to spend Christmas with?

Um.  Let's see, it should be somebody who really knows how to have fun, and who likes the same music I do.  Or we could just go with Kermit the Frog.  Oo, or maybe the Doctor, he's a lot of fun at a party!

What is your favorite Christmas song?

Oh, I have so many favorites!  I much prefer older carols and hymns.  A few favorites are The Wexford Carol, In the Bleak Mid-Winter,  and The Holly and the Ivy.

What is your favorite Christmas Book/Story  (besides, ya know, THE story)?

My favorite is The Children of Green Knowe, by L. M. Boston.  It's particularly special this year since I got to visit! I can imagine it much better now.

Which do you prefer: multicolored lights or white lights?

Multicolored lights all the way!

What time period/decade would you most like to spend Christmas in?

Assuming I'm protected from plague and other ills, I would like to take a page from Spenser's book and see a masque at the Tudor court's Christmas feast.  Don't forget the woodwoses!

Which period drama has the best Christmas scene/episode?