Shiki Nagaoka: A Nose for Fiction 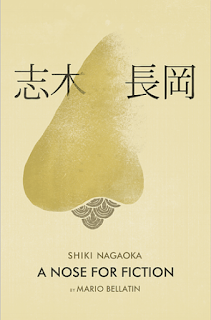 Shiki Nagaoka: A Nose for Fiction, by Mario Bellatin


This is one of the odder books I've come across lately.  Bellatin is a Mexican novelist who writes experimental fiction stuff.  This is a biography and analysis of the famous, mysterious, and reclusive Japanese (?) author, Shiki Nagoka, whose massive nose led him to spend his life within a tightly circumscribed neighborhood -- living alone, working at a photo booth, and writing.  He lived part of his life in a monastic cell.

Nagaoka's work has a cult following and has inspired many famous novelists (such as Juan Rulfo and Jose Maria Arguedas), but none of it has ever been translated into English, except for one edition that was entirely destroyed.  His most famous work, a novel, in written in an untranslatable language and still hasn't been completely deciphered.

The writer's day job at a photo booth gave him plenty of inspiration through images, so his work included many photos.  There are quite a few photos included in this biography, mostly of accessories to Nagaoka's life, especially the instruments for the treatments he carried out on his nose.  His sister Etsuko is also prominently featured.


While he found himself under these ruminations, one morning he met the writer Tanizaki Junichiro, who had decided to relocate his residence to the peninsula of Ikeno.  The writer went to the film kiosk to have a few rolls developed.  That writer became the only other artist Shiki Nagaoka knew personally over the course of his life...When he looked through Tanizaki Junichiro's photos he was surprised.  he was used to seeing scenes of everyday life or country scenery.  But Taniszaki Junichiro had taken infinite portraits of bathrooms.

In his final years, Shiki Nagaoka wrote a book that for many is fundamental.  Unfortunately it doesn't exist in any known language.

Now that the majority of his youthful monogatarutsis have been restored, the publication of his collected nose-obsessed tales is expected to become the talk of the editorial town next year.  The book is enthusiastically waited for as much by the readers and critics of his home country as by specialist groups in Europe and the Americas.  Curiously, Shiki Nagaoka's work is unknown in several countries in the East.  Nonetheless, for some time now the intellectual community of Japan has generally shown great interest in our author's books.  Their appreciation is perhaps the most powerful sign of his work's universal character. 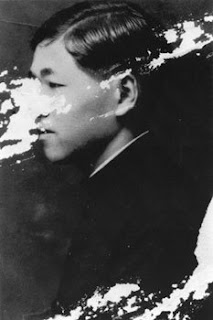 This is a fun and weird little story.  It's heavily implied that Shiki is Japanese, but it never says so, and the words don't quite seem right.  I don't know much of anything about the Japanese language, but it seems that the words have been changed a bit to be not quite real.  Everything is off-kilter and just a bit absurd or surreal.  Bellatin doesn't hesitate to drag real writers into his fictional portrait, either.  I liked it.