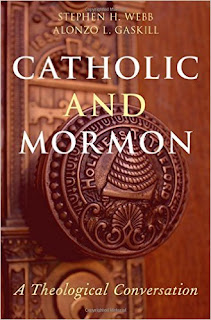 I hope everybody had a nice break and holiday and so on!  We sure did.  It was relaxing and lovely, and my sister got a job so everybody's employed (yay!) and I took my kids ice skating today.  I've been feeling very lazy about the blogging thing, but I have a lot to do before the end of the year, so...

This is a friendly theological discussion of similarities and differences between the Roman Catholic Church and the LDS Church, written by two theologian types whose work I am somewhat familiar with, and published by Oxford UP.  Stephen Webb was a professor at Wabash College, and then became editor of First Things magazine; as he narrates, he started life as a Protestant but eventually decided that the Reformation had accomplished its goals and then became Catholic.  Alonzo Gaskill is an LDS scholar at BYU, and has done a lot of historical work.  He was raised Greek Orthodox and became LDS as a young adult.  Together they have a wide range of experience!

Each chapter is a discussion of a particular topic: grace, revelation, authority, Mary, Jesus Christ, and so on, and is structured as a four-part discussion.  One starts by giving his thoughts on the subject, the other responds, and then they each take another turn.  They are very friendly and are quick to point out virtues in each other's faith traditions, as well as in any others that come up in discussion.  The focus is on what we can all learn from one another.

I do get the impression that Webb was unusually enthusiastic about LDS ideas, compared to most Catholic theologians.  He clearly explains differences in theology and has lots of great stuff to say.  He'll also come out with statements like "I see no reason why Catholics cannot believe that Joseph [Smith] was inspired by the light of Christ to seek an institutional authority that was basically a tribute to the Roman Catholic Church." I suspect that would be a surprising opinion to many Catholics!

I enjoyed this book a lot, especially for its emphasis on building bridges and learning from each other's virtues and good practices.   I did feel like it tended to focus more on the LDS side than the Catholic side and would have liked more Catholic material.  It's a welcome addition to books of constructive religious dialogue, and I would like to see more.
religion TBR challenge