By Jean - September 10, 2013
It's been a while since I've posted this meme, but the beginning of school has been pretty overwhelming.  I have just one thing to show off.  We've been preparing for Banned Books Week at work, and we're taking photos for a rogue's gallery of people caught reading questionable literature.  Here I am, caught in the act, with the awesome sign I made for the project.  I wanted an old-school letterboard, but those things are impossible to find.  There were tons of letters at work, though, because there is a board bolted to the wall, so I stuck them into a piece of black foam core board. 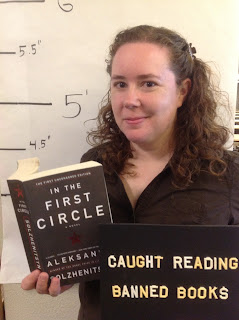