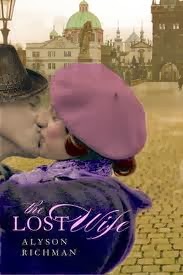 The Lost Wife, by Alyson Richman

In Prague, in 1938, two young people fall in love and get married just as war is about to destroy everything they know.  Separated by events, they each believe that the other has died, until a wedding many years later, when they recognize each other.

That's not a spoiler because it's how the novel opens.  You read the story to find out how it happened.  Lenka tells her story from the beginning, while Josef tells his backwards.

It's a gripping novel, and I quite enjoyed it, though it is a little toastier than I really prefer. Richman writes well, and she actually based her novel on a real-life incident she heard of through a family connection--two people really did meet at a wedding and recognize each other as their long-lost spouses.

It's also, as you might expect, a really, really tragic novel.  As Jews, Lenka and her family are shipped out of Prague and end up in Terezin (Theresienstadt) for most of the war.  Josef's family gets out at the last moment, and endure their trials as well.  Josef's life is dominated by survivor's guilt, Lenka's by the trauma she went through.

A good novel, very worth reading, but very sad.


This officially completes my Wishlist Challenge!  I am still reading wishlist books of course--I'm still in trouble.  The challenge was supposed to help me shrink my wishlist, but I've added way more than 12 titles to it since January...