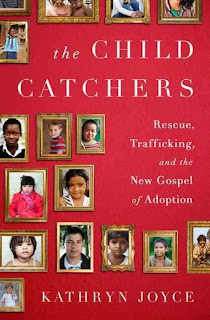 The New Child Catchers: Rescue, Trafficking, and the New Gospel of Adoption, by Kathryn Joyce

I thought a lot of Kathryn Joyce's previous book, Quiverfull, and so I hoped to get this new title as soon as possible.  Here, Joyce takes on the very very emotionally and politically fraught topic of international adoption, especially as influenced by American evangelicals.

Adoption has become a huge topic in the evangelical world over the past decade or so.  Logically enough, pro-life Christians want to put their money where their mouths are and obey the Biblical commandment to care for the needy, especially widows and orphans.  Told that there are millions of orphaned children living in institutions in poverty, good and well-meaning people want to bring those children into families.  But the reality is not so simple; there are not, in fact, millions of orphaned children with no family to care for them.  There are a lot of children living in poverty, but very often they have family.

Joyce starts off with Haiti.  Remember how, after the terrible earthquake a few years ago, suddenly everyone seemed to want to bring Haitian children to the United States to adopt?  The assumption was that there were all these children orphaned by the earthquake and that an overwhelmed society would be unable to care for them.  The situation was, in fact, much murkier than that; many children had living parents or family members, but were separated in the chaos--or simply very poor.  Most of them probably didn't need to be whisked away so much as they needed help right where they were.

This is a scenario that has played out in many countries over the past several decades.  There is an enormous demand for children to adopt, and there are many children living in poverty around the world.  Those two facts are not necessarily easily paired up to produce children adopted into happy families.   Where there is a demand, there is an opportunity for profit, and an incentive for corruption.  There are people exploiting both sides and making a profit.  Joyce has got some really tragic stories about adoptions that were too lax or otherwise corrupt.

Joyce talks about adoption in several countries, from Korea to Rwanda.  She holds Rwanda up as something of an example of how governments are currently trying to handle international adoption, by making very sure that each child really has no family, and by working to ensure that each child goes to an appropriate home that can afford the kind of care necessary.   This is a slow process, and therefore very frustrating for the many hopeful people who are sure that there are many children needing to be adopted and uninformed about the entire, very complicated, picture.

I thought it was a good analysis of an incredibly difficult issue.  Joyce is sympathetic to all sides and careful, trying to make distinctions that are not easy to make.