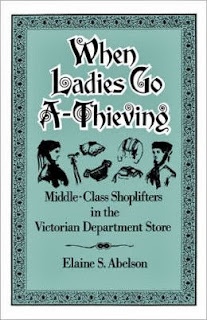 This is a fairly academic-style discussion of the rise of the great department stores in the late Victorian era (but in America only; no UK here).  Shoplifters were immediately a serious problem, one that was very difficult to address for many reasons.

Abelson starts off with a thorough description of department stores.  She is really good at describing how incredible and tempting they were!  No one had ever seen anything like it before in the United States; everyone was used to little, dark dry-goods stores with a limited selection of goods, and suddenly there are these huge buildings crammed with wonderful stuff all over the counters.  People were dazzled.  Abelson describes the rise of plate-glass windows to give light and then the idea of elaborate window displays, the evolution of shop counters from heavy wood to light glass (which both showed off the merchandise and made it hard to grab), and the introduction of mirrors all over the place (lightens things up, makes space look bigger, attracts people, and makes it easy to keep an eye on shoppers!).

She covers the development of shopping as a leisure pastime, universally considered to be the business and the pleasure of women.  Roles for women were changing, but the Victorian image of middle-class women as delicate ladies of unimpeachable moral fiber only got more popular.  Shopping was one of those issues people argued about all the time: was it a vice, a waste of time and money?  Was it a necessity to the beauty-loving nature of a woman?

Then there is the position of shopgirls, who were poor and lower-class, and therefore under some suspicion as possible thieves, but also entrusted to keep their eyes open for trouble.  Abelson spends a lot of time on class.

Finally we get to the actual shoplifting.  Stores didn't want to make a big thing of it and look weak, nor did they want to alienate customers.  So they were constantly trying to fight shoplifting by keeping eyes open, and hired detective floorwalkers--but they almost never prosecuted.  It was impossible for anyone to admit that middle-or upper-class ladies would steal (which they did all the time), so a theory of kleptomania emerged that happily blamed theft on a woman's natural imbalance and hysteria.  For a well-off woman, stealing was an illness; for a poor woman, it was crime.

This was a fascinating topic, but the heavy academic treatment made it a slow read.  So much time spent on gender and class issues made for a less interesting book.  It could therefore have been shorter and snappier, but I would not be surprised to learn that this is her PhD thesis, lightened up for a general audience.


This is the 12th book on my official TBR list!  I plan to read the other two as well, but this officially fulfills the Roof Beam Reader TBR challenge.