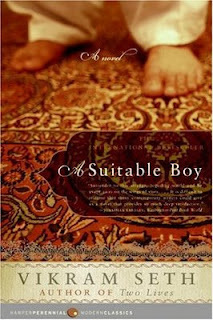 A Suitable Boy, by Vikram Seth

I have done it!  I feel so proud.  I think this is the longest book I've ever read, at nearly 1500 pages (it's more like a brick than a book; at one point it actually rolled down my pillow).  And I enjoyed it so much.  It only took me 20 years to get around to reading it, too.

It's 1950 in post-Partition Bengal.  Lata Mehra is the youngest of 4 siblings, and her mother's mission in life is to find a suitable boy for Lata to marry.   Lata, however, is not at all sure that she wants to get married quite yet; she's in university.  And then she meets a boy who pursues her...

From Lata, we move out to meet her family members and connections.  There are four families central to the story, and they all have connections too.  Seth's novel grows to narrate the lives of people at every level of society, from the poorest peasants and workers to the wealthiest landlords.  Hindus and Muslims, traditionalists and radicals, courtesans, musicians, gurus, and Nehru himself are woven together to make a tapestry that depicts Bengali society in 1950.

There is a lot of politics.  Almost too much, but it was really interesting too.  One of the main themes is political tension in Bengal (and the rest of India): was partition a good idea?  How to transition from subjection by the British to independence?  How to help Muslims and Hindus live together?  How to help India's poor people rise up?  In the novel, a politician is trying to bring in land reform by abolishing the zamindari system (a sort of feudal system with princely landlords), and that brings up all sorts of issues.  Seth has a judge ponder on Partition and its consequences:


...those two pages reflected the passage of an empire and the birth of two countries from the idea--tragic and ignorant--that people of different religions could not live together.

I was hooked on Lata's story--eventually, she has 3 suitors to decide between, and she's not sure she wants to deal with any of them--and also the plot revolving around Maan Kapoor, who is in love with the wrong girl and otherwise directionless.  Just as he starts to find a place for himself, it all falls to pieces.  So many other characters have fascinating stories, too.  100 pages before the end, I was really wondering how Seth was going to tie everything up in the time left.


In some ways, A Suitable Boy reminded me of In the First Circle--both used a central character as an anchor for an enormous wandery book that attempts to show a whole society at a moment in time (at about the same moment, too, close to 1950).

Definitely one of my best books of the year.

Come to think of it, a lot of my best books of the year have been gigantic chunksters (OK, not Pamela).  And to think I've been putting them off for all this time.  Good thing I decided to make 2013 the year of the giant book!
chunksters classics Indian literature TBR challenge