Shopping for a Better Country 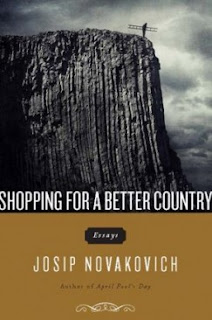 Shopping for a Better Country: Essays by Josip Novakovich

Josip Novakovic* is originally from Croatia--well, when he lived there it was Yugoslavia--and he has lived in the US and various other places in Europe since college.  These essays are collected from many years of writing, and though they certainly feature exilic themes and travel, they are about all sorts of things, really.

I like the way Novakovic writes; matter-of-fact and taking everything as it comes.  I liked that he consciously refused to judge countries based on short visits. He writes about his mother and his family--he has a son who plays the cello--about people he has met on travels, and about the difficulties of Russian airports or traveling to Croatia during and after the war there.

A couple of bits I liked:


An old man near my hometown claimed that he had no need to travel.  He had lived in eight countries and in one house.  He remained faithful to the previous regimes, and thus felt like an exile most of his life, without going to the train station.  He still loved the Hapsburg Emperor Franz-Josef.

[A doctor] said...you probably have many nightmares every night.
Doesn't everybody?
No.
That puzzled me--how could you live without nightmares?  What kind of life is that?

An interesting book, but then I like reading about travel and odd stories.


*On the cover it says Novakovich, in the book it says Novakovic.  If you want to find the book, use the first version, but otherwise the second seems to be preferred.
essay challenge Euro Challenge non-fiction Wishlist