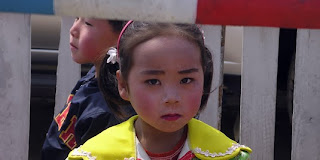 Only Beautiful, Please: A British Diplomat in North Korea, by John Everard

I ran into this title a little while ago at the library and had to read it right away.  Folks, this is a book about life in North Korea, written by the former British ambassador, and while the other books I've read about North Korea have been about life in the countryside or in prison camps, this is the first time I've run into a book about how the wealthier classes live.

"Wealthier" being a very relative term, of course.  Here, it means the middle- and upper-class people in Pyongyang, who have approved family backgrounds and decent jobs, but it's nothing that you or I would recognize as wealth, because the whole country is slowly crumbling.  Even these people worry about food, and though they get rice every day (while for the poor, rice is a once-a-year treat), they mainly live on rice and kimchi, with some beans sometimes.

Everard had little interaction with the really elite governing class, which lives in a separate enclave and dislikes mingling with foreigners.  Nor was he allowed much movement outside the capital of Pyongyang, so he met few people in the countryside, and of course he never got a glimpse of the worst places at all.

He therefore offers a sort of ethnography--as much as he could figure out, though there was much more
he couldn't see--of the middle/upper-class in North Korea.  That is the first half of the book.  Everard also talks about life in the DPRK for foreigners, which is not easy.

The third section is a short history of North Korea, which I found very useful.  Everard talks about his impressions of how the DPRK came to be such a strange place--part of the Communist Bloc, but never really very communist--more of a Stalinesque personality cult/nationalist dictatorship with a good dose of old 19th century Korean culture (warped) thrown in.  Everard thinks it's more like Nazi Germany or even a massive Jonestown than it is like one of the other (now formerly-)communist countries.  His reports of what those countries thought of working with the DPRK are quite interesting!

The final section explains what the rest of the world has tried to do with the DPRK, and why it hasn't worked all that well (though, on the bright side, there has not been a resurgence of the war).  It's incredibly difficult to figure out what might work.  The DPRK is an intensely nationalist and inward-looking country run mostly by elderly men who still think the way they did during the Korean War, and they reinforce each other in a groupthink spiral.  Any idea from outside is violently rejected, simply on the grounds that it is from outside, and the worst aspects of the regime are the ones that are hardest for them to give up.

Fascinating book, and I would highly recommend it if you're looking to understand something about North Korea.  Other books I have read and found very interesting are Escape from Camp 14 and Nothing to Envy.
history politics