What To Expect When No One's Expecting 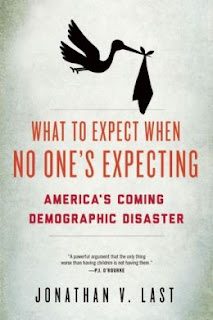 What To Expect When No One's Expecting: America's Coming Demographic Disaster, by Jonathan V. Last

I've been quite taken up with school and work and all sorts of things, so I haven't been around at all, but I have been reading.  I have a whole bunch of books going on at once, in fact.

Jonathan Last takes on demographic numbers here, and although I suppose his primary focus is on the United States, he spends a lot of time talking about the whole world too, since sharply dropping birthrates are a worldwide trend.  His thesis is that while population is expanding now, that is not because we are having too many babies; it's just that there are a lot of people getting older and living longer.  Within a generation or two, populations will start shrinking, and by then there will not be a lot of young people to have babies.  The drop in birthrates is so dramatic that prosperity will actually become difficult to sustain--not because of resource scarcity but because of other factors.

Shrinking populations might sound like a good idea to lots of people, since we live in a crowded world.  But Last points out a lot of problems.  If there aren't many young people, it becomes extremely difficult to support all the old people who expect pensions--in fact, economies stagnate and young workers struggle to get by under the pressure.  Creativity and problem-solving is largely the province of the young.  And so on.

Last spends a lot of time on the small factors that add up to discourage people from having babies.  It's really interesting!  He talks about how what kind of place you live in affects your decisions, how culture comes into it, and especially how laws and taxes might discourage people to have fewer children than they otherwise would (car seat laws are a great example; although the people who pass strict car seat laws have nothing but good intentions, it's easy to see that those laws also make it much more expensive to have more than two children, since a parent of 3 kids must purchase a mini-van just to get all the car seats in).  Last talks about how to make legal changes that would make it just a little bit easier to have kids if you want, but all that probably won't help too much when kids are as incredibly expensive as they are now.


Some countries have tried to establish incentives for child-bearing, such as cash bonuses or guaranteed paid leave.  Last analyzes these too, and concludes that while incentives are very nice, they have little effect in convincing people to have more children.  Having a baby is a lot of work, after all.

It's an interesting and fast read.  Last is an opinionated guy, and I wouldn't expect a lot of people to agree with everything he says, but life would be pretty boring if you only read things you agree with.
non-fiction