By Jean - September 16, 2013
A little while ago Bev at My Reader's Block did this fun little survey, and invited others to do so as well.  I promised to do it, but only after I was done with the 15-Day Challenge, since I don't like to do all memes all the time.  Gotta space 'em out a bit, right? 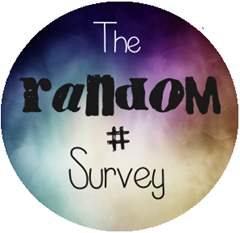 1. Pick a number.
Keep in mind how many books you have.  If you have one bookshelf like me you may want to keep it between 1-10.  If you're like Book BFF Angela and have a bunch of bookshelves you may want to pick between a higher range like 1-50.
I used Random.org and got the # 8!

2. Go to your bookshelf and count that many books until you reach your number. Answer the question with that book.
(I counted 8 books in and got Delirium).  So I used Delirium to answer question 1.

3. Count the same number of books from where you left off and answer the next question.
Then I counted 8 more books after Delirium and got The Evolution of Mara Dyer and used that book to answer question 2.  You get the idea...


I am going to use the largest book area in my house, which is filled with literature, history, and all sorts of things.  But the SF/fantasy and children's books and religion and my TBR pile live elsewhere.  Still, it's a largeish shelf, so I'm going to pick a number between 1 and 30, using random.org.

1. What do you think of the cover?
Agnes Grey, by Anne Bronte.  The cover on my edition--which I can't find online--is an illustration of the story, painted by Edmund Dulac for a 1905 edition.  I do not care for it, sad to say.

My Antonia, by Willa Cather.  An American classic beautifully evoking the frontier.  Lovely and heartbreaking.

3. How or where did you get this book?

Daguerrotypes and Other Essays, by Isak Dinesen.  I bought it for a Scandinavian lit course focused on Dinesen that I took in my senior year of college, probably spring '95.  I can see that I bought it used at the Cal bookstore (not Ned's, but the official bookstore), and that it had at least two owners before me.

The neat thing about this book is that at some point during class, I doodled an entire song in Danish on the stickers on the back cover (in very tiny writing).  I had completely forgotten this particular song, but as soon as I saw it I remembered, and now I can sing the whole thing.  In fact it is stuck in my head.  It was written and performed by a couple of guys I knew who had a musical duo going and hoped to hit--not quite the big time, but maybe the medium time.  I googled the words and got nothing, so I guess they never put anything up on the Internet once it got started.


4. Who's your favorite character in this book and why?

Silence, by Shusaku Endo.  I cannot tell you, for I have never read this book.  It is waiting for me!  My brother gave it to me after he read it.

North and South, by Elizabeth Gaskell.  Lots of people love this novel!  I bet Emily at Classics and Beyond has already read it.  Adriana at Classical Quest would probably enjoy it, and Ruth at An Experiment With the Well-Educated Mind.

6. How long ago did you read this book?

Three Men in a Boat, by Jerome K. Jerome.  Hm, at least 5 years ago, probably a little more than that.  It's very fun and I would enjoy reading it again.

7. Name a favorite scene from this book. (NO SPOILERS)

Oh.  Er.  I'm afraid it's The Complete Poetry of Henry Vaughan.  Which I have not even read properly, it's just that at one point I thought it would be cool if I did.  Which is true, but I haven't yet achieved that level of cool.

The Nibelungenlied (prose translation).  "Then the carefree knight rode to his wife, and Hagen lost no time in telling the King how he proposed to master this incomparable warrior.  No man should take treachery to such lengths."
9. How did you hear about or discover this book?

The Other Side of the Sun, by Madeline L'Engle.  Around the time I started college I had a thing for collecting all her books, including the romance novels for grownups, of which this is one.  Sort of like Phyllis Whitney?

10. If you could redesign the cover what would you do?

Sunlight on the Lawn, by Beverley Nichols.  Actually this cover is pretty genius.  It's all scrolly and twee, which is what the book is like.  This is the third in the Merry Hall trilogy, which is about Nichols' renovation of his Georgian manor house and the grounds; this third book is about the people around the place.  Witty and precious.

11. Name your least favorite character in this book and why?

Ivanhoe, by Sir Walter Scott.  Sir Brian de Bois-Guilbert, of course!  Could he be any more hateable?

If you like Barbara Pym, but want something more cheerful, or if you like Margery Sharp, then you should try Peace Breaks Out, by Angela Thirkell.  Actually you should try a much earlier book in the series, like High Rising or Wild Strawberries.  Peace Breaks Out is (IMO) the last good Barsetshire novel; after that they go downhill.  Be warned that she is an appalling snob, but of course she is; they are comedies of manners.  In fact if you wish for a modern Jane Austen (though, of course, not in that league at all), give these a try.

13. Name one cool thing about this book (under the dust jacket, map, font, photograph, etc.)
In the Wilderness, by Sigrid Undset. This is a vintage Pocket paperback, a first printing from 1964.  I don't think it's ever been read, but all four are inscribed "Elina Holst."  It's the third of four, and I managed to lose the first volume, The Axe, while I was reading it.  I would really quite like to read this tetralogy, so I am annoyed about that.

14.  Where is it set and would you ever want to visit that world/place?

Stories in Stone: A Field Guide to Cemetery Symbolism and Iconography, by Douglas Keister.  "For Sandy: Wife, Friend, and Boneyard Buddy"

I hope a few folks will pick this up and do it too!  Let me know if you do.
fun