Witch Week on the radio! 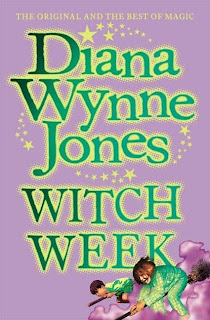 BBC Radio broadcast a dramatized version of Diana Wynne Jones' Witch Week the other day. I've listened to some of it, but it's always hard to find time to just listen to something, so I'm worried I won't get to hear the whole thing. I want to know what kind of voice Chrestomanci was given! So far it's taken some liberties with the original text, which is unfortunate but inevitable if you're trying to squish a novel into an hour of dialogue.

Anonymous said…
I'm so glad book blogs exist, or I'd never have known about this! I'm planning to listen it today while doing some cross-stitching -- although I wish I could download it and listen to it on the subway to and from work this week. That would make my commute so lovely and pleasant.

(I have been informed by other sources that Chrestomanci's voice is not pleasing and will not satisfy us. So, er, be prepared. :p)
April 1, 2012 at 7:28 AM

Jean said…
Yes, I was not all that thrilled with Chrestomanci. Of course, I'm not entirely certain that any human being could really play Chrestomanci in a way that *would* satisfy those of us who know him. :)
April 1, 2012 at 8:18 AM