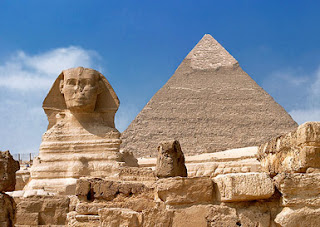 I was going to spend a lot of time blogging today, but real life got in the way, so you just get the latest installment in the Herodotus saga. Book II is all about Egypt--its geography, wildlife, culture, and history. Herodotus puts in quite a bit about religion, though that's a subject he generally tries to avoid; since Egypt claimed to be the oldest civilization with the longest history, there is lots of investigating to do with the priests.

The funny thing about this book is that Herodotus got quite a lot of his material wrong. The entire chapter is liberally sprinkled with footnotes saying "Herodotus is wrong here" or "of course the Egyptians are quite wrong about the lake." After a while I felt like Kermit the Frog in The Great Muppet Caper, when he says "You know, it's amazing. You are 100 per cent wrong. I mean, nothing you've said has been right."

So while it's quite interesting to read all about Egypt, apparently we are supposed to take this book with a large grain of salt.
Greek classics