By Jean - March 17, 2012
Allie over at A Literary Odyssey is hosting a Victorian literature celebration in June and July. There are prizes! Allie writes:

Some of my very favorite writers come from the era, and I still have many others to discover. During the months of June and July, I'm only going to be reading titles from this time period. I hope you'll decide to join me for a text or two.

The Victorian era in literature refers to the time that Queen Victoria was ruling in Britain (1837-1901). It was a time period of great peace and prosperity for Britain and allowed for a lot of artistic and literary expression. Generally speaking, Victorians are only the British authors who published during this time period. However, some like to group American writers and others into the mix since their work can be closely tied together. 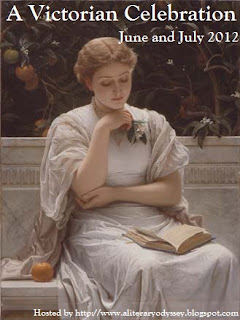 To give you an idea of what writers I am talking about, some of the most well-known Victorian writers include: Charles Dickens, George Eliot, Wilkie Collins, William Makepeace Thackeray, Anthony Trollope, and the Bronte sisters. Others include Lewis Carroll, Robert Louis Stevenson, Anna Sewell, and the Brownings. There are countless more, but these are the big hitters and those most commonly referred to as Victorians.

For this event, the goal is to read as many Victorian pieces as you wish during the months of June and July.

Well, that's as good a time as any for me to enjoy some Trollope and Dickens! I won't read Victorian literature exclusively, but I will certainly read a few books. Head on over to Allie's place and sign yourself up!
classics Victorian