The Book of the City of Ladies 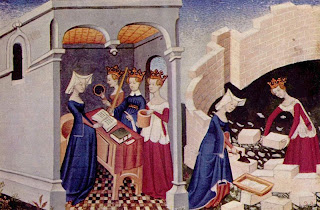 The Book of the City of Ladies, by Christine de Pizan

I think The Book of the City of Ladies is one of the greatest medieval works I've ever read. I loved it, so I'm very grateful to JCNL and Eva for introducing me to this wonderful book.

The background information on Christine de Pizan is available at my post over on the Year of Feminist Classics blog. Since I read The Romance of the Rose last month, I could well understand her indignation at medieval writers' constant harping on how evil women were. It was certainly very convenient for them, and must have gotten very tiring for the women.

Christine builds her city in three sections. First, she and Reason lay the foundation for the city by clearing the ground--that is, by getting rid of some common ideas about women, most especially those espoused by writers. Romans like Ovid or Cato are contradicted or explained away, and more current writers are ridiculed. Reason uses Christianity to show that since women are a creation of God, and were formed from Adam's rib (that is, his side, showing equality), they are "equally good and noble." Biblical figures are used to show that God has given women special favors, and Reason points out that no one should despise feminine jobs like sewing, since without them we wouldn't be very happy.

Foundation stones are then laid for the city with great and noble queens from history and mythology. Several of these queens feature in Herodotus too, so I could sometimes find one person in two different stories (Christine was not using Herodotus, so the stories don't match). Christine asks Reason to give examples of women who were especially learned, and women who actually invented new things. This is quite an impressive list, since Christine turns mythological goddesses into historical inventors! Thus Ceres developed agriculture, Minerva invented armor, writing, and wool-spinning, Isis invented gardens, and Arachne came up with dyeing and the use of linen. Civilization would not exist without women, Christine assures us. A final list of women who were wise, virtuous, and brave finishes off the city foundations, proving that "God has never held... the feminine sex in reproach."

Now it is Rectitude's turn to build houses for the city and fill it with people. This is done with examples of women who showed some specific virtue that male writers have not credited: prophecy, filial piety, wifely love and support, discretion (Jean de Meun gets a special mention here), wisdom, and so on. Example after example proves that the books are wrong when they claim that marriage to a woman is nothing but trouble, as Rectitude tells stories about women who saved their husbands or their whole countries. Even more examples are given when we get to the common medieval accusation that women are incapable of chastity or fidelity in marriage; this is a special point of importance for Christine (and no wonder, as this reasoning was apparently routinely used to justify rape).

Finally, Justice arrives to put the crowning touches on the city. She is going to build golden roofs and towers, and choose a queen for the city. These highest spots go to female martyrs of Christianity, and the queen, of course, is the Virgin Mary. She closes with an exhortation to all women to prove slanderous lies wrong by living virtuously.

If you're still reading and haven't been bored to death by my summary, I had a great time reading this book. I love how Christine uses other writers' own weapons against them by pointing out the plain truth that history and Christianity are full of amazing women. Her facts, her logic and her rhetorical tools are perfectly sound by the standards of her day. I would love to get hold of more documents about the Quarrel of the Romance of the Rose, to see how other writers responded to Christine's arguments.

I'm no good at critiquing this work, because I just flat out loved it.
medieval

Jennifer said…
Hurray! I'm so glad you liked this one, because I'm planning on reading it, too, probably after I finish The Letters of Abelard and Heloise, which I'm just starting.
March 27, 2012 at 1:55 AM