The School of Freedom 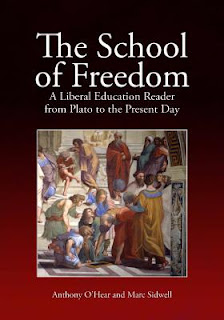 The School of Freedom: A Liberal Education Reader from Plato to the Present Day, by Anthony O'Hear and Marc Sidwell

Just so you know, I thought this was a really great book. It took me forever to read, though; it consists of excerpts from writers throughout history and is fairly heavy going. Through these bits of writing, you gain a picture of what a "liberal education" has looked like at various times, and its development until today. A liberal education is defined as that befitting a free citizen, preparing the student to function in a free society, engage in open debate of ideas, and participate in government. A liberal education has no end and is on-going; it exposes the student to a wide range of ideas and (one hopes) teaches a thirst for knowledge. In America these days we often call it classical education since "liberal" has taken on a particular political meaning.

The book starts off with Greek and Roman writers, and then focuses in on the liberal education tradition in Britain. I enjoyed reading the words of medieval people like Alcuin and Alfred the Great! O'Hear and Sidwell chronicle liberal education through the Renaissance, the Enlightenment, and the Industrial Revolution, which was really nice.

I was particularly fascinated with the 19th-century sections, which talked a lot about working-class educational efforts like the University Extension Movement. It reminded me of a book I really enjoyed last year, The Intellectual Life of the British Working Classes, by Jonathan Rose. And on the next page, that book was quoted extensively, so that made me happy.

The section on the 20th century was equally interesting, with several selections (sometimes just notations, really) and two full-length essays that were not easy reading, but were very rewarding. I was pleased to see a shout-out to classical homeschoolers in America, and less pleased to note that the authors mention Douglas Wilson and Oliver DeMille (two people I really disapprove of), but not Jessie Wise and Susan Wise Bauer, who to my mind are both more popular and more representative of the classical tradition.

I would love to own this book; I put so many bookmarks into my ILL'ed copy that I'm not sure I'll be able to note everything down before I have to give it back. I'm hoping to be able to purchase it someday, re-read the essays, and make lots of notes. It's not an easy book to find, and my borrowed copy came from two states away.

A similar book exists that may be easier for American readers to get hold of; it's called The Grand Tradition and is about three times as long. I need to pull it out again! (Also I love the cover image.)
150+ Challenge 52 books