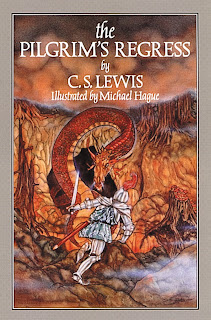 As long as I was reading medieval allegory (which I was--I just haven't posted about it yet), I thought I would re-read one of C. S. Lewis' first books, which was written as an allegory that deliberately mirrors Bunyan's Pilgrim's Progress. Lewis didn't exactly write it as a spiritual autobiography--it doesn't map on to events in his own life--but it does chronicle a very similar path.

Since it's one of Lewis' earliest books, it's kind of obscure in content, plain weird in some spots, and definitely not the sort of thing that everyone is going to love. But I liked it, though the writing is less adept than it is in later works. Some bits were quite funny too.
150+ Challenge 52 books

Carol Weaver said…
I have a quote from this book on my wall: "Do you know what happens to people who set about learning to skate with a determination to get no falls? They fall as often as the rest of us, and they cannot skate in the end." I have always loved it but have never read the book! I have had more than one person tell me they think I would like it though. So, you have inspired me.