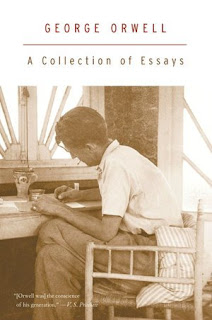 A Collection of Essays by George Orwell

George Orwell wrote a lot of essays, and here is an assorted collection: some autobiographical, others analyzing literature or popular culture, some plain political. The famous ones such as "Shooting an Elephant" or "Politics and the English Language" are included, and it seems to be a very good representative sample of Orwell's writing.

"Such, Such Were the Joys" is the first essay, about the prep school Orwell was sent to as a boy and how horrible it was. (You did not expect him to enjoy school, did you?) It does indeed sound horrible, and as a less-wealthy unathletic introvert of a boy, he fared badly. It's no wonder classical education died in England, if this was what it looked like--and of course it usually did. Orwell comments that "I doubt whether classical education ever has been or can be successfully carried on without corporal punishment," which is pretty discouraging to a (neo)classical homeschooler like me, but then I'm not actually trying to do the same thing. (I got an interesting contrast from a podcast I listened to last night all about C. S. Lewis and Latin. Lewis also hated his prep school, but loved his classics anyway, and escaped school by going to a tutor. He was a lifelong advocate of classical education, but not of prep schools.)

The thing that struck me most about the essays was how very different a world from ours Orwell lived in. I do not usually get that impression from pre-WWII books; sure, life was different and all, but Orwell makes me feel like I live on a different planet. The main thing is that he makes it absolutely clear that he thinks that capitalism is stone dead, and that totalitarianism of one form or another is going to take over everywhere. It's either going to be communism or fascism, and either way, everything is going to be thuggery and naked power for quite a long time. No more literary freedom or anything like that; there will be a new kind of literature, but not for a long time. As far as he was concerned, 1984 really was the future.

There are other things too, though, that caught me up and showed how very differently he thought. One essay on the social value of those vulgar postcards that used to be sold at the seaside has several instances, the most striking of which is about how much earlier people used to age. Orwell comments that in the working classes people look older than middle-class people of the same age--and it's no longer because their living conditions are so different, but because middle-class people have adopted a new practice of trying to look younger even after 30. He comments, "The impulse to cling to youth at all costs, to attempt to preserve your sexual attraction, to see even in middle age a future for yourself and not merely for your children, is a thing of recent growth and has only precariously established itself. It will probably disappear again when our standard of living drops and our birth-rate rises. " Oh George, if you could see us now...

Orwell himself was a democratic socialist (though then he says democracy and socialism don't go together), but he often says things that make it difficult to tell exactly what he thinks. Mostly he is very pessimistic about everything. But I am not sure, for example, if the British post-war transition to light socialism would have been what he was aiming for--certainly the general rise in standards of living was one of his main goals, but I'm not sure about anything else. And near the end of "England Your England," written in 1941, he says something I don't understand at all: "...the people picked a leader nearer to their mood, Churchill, who was at any rate able to grasp that wars are not won without fighting. Later, perhaps, they will pick another leader who can grasp that only socialist nations can fight effectively." I have no idea what that last sentence even means. Does it mean that a socialist nation would have better-nourished soldiers? That it could rally industry more effectively? What?

He's certainly not very interested in half of the human species. Remarkably few women are ever mentioned. Even when he's listing Bloomsbury writers, Virginia Woolf's name never appears.

I had a good time reading all the essays, and if you decide to pick this one up, be sure not to skip pieces just because they sound obscure and random. Orwell seems to specialize in starting off by analyzing some small part of popular culture, like boys' magazines or vulgar postcards, and then turning it into a an entire social commentary. It's quite interesting, so don't miss it.

(The copy I have of this book is not nearly as pretty as the photo here. Mine is about as ugly as possible--just some brown and orange paint strokes--but happily there is no image of that online.)
TBR challenge

Amy said…
I really developed a liking for Orwell after reading his Road to Wigan Pier a couple of years ago. It was a piece of investigative journalism on conditions among miners and their families in the north of England. There were some essays tacked on the end also. I get what you mean about his tendency to drop obscure remarks, but his outrage at the dead-end lives so many people lived really made me warm to him.

Hanna @ Booking in Heels said…
I read a similar collection called 'Books and Cigarettes' and I loved it. I think my favourite was about his time working in a bookshop when he was younger. I've seen it online before so it's definitely worth looking up :)
March 26, 2012 at 4:11 AM

Jean said…
Oh Amy, I love The Road to Wigan Pier--that and Keep the Aspidistra Flying are my favorite Orwell works (not that I've read them all). I love the bit where he recites a litany of 'weird' things that people associate with socialism that turns them off. Weird things like vegetarianism, acceptance of birth control, and sandal-wearing.