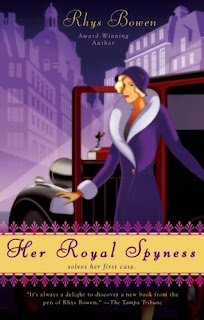 Her Royal Spyness, by Rhys Bowen

Georgie is penniless nobility--sister to a duke, 34th in line to the throne, and without a bean to call her own. So she heads off to London to seek her fortune and try to get a job without attracting the notice of Her Majesty, who will either marry her off to a boring German prince or shove her into a job as lady-in-waiting to an elderly princess. Georgie starts a housekeeping business, but next thing she knows there's a dead body in her bathtub. Her brother is blamed for it and he's not clever enough to save himself, so it's up to Georgie to clear the family name and not get killed in the process.

This was a very funny mystery, and the 30's London setting, full of Bright Young Things (and a cameo appearance from Mrs. Simpson!), was fun too. I really enjoyed it. Not only that, the book was a present from a fellow reader, and it showed up right when I needed a fun, light read, so thank you Stacia! Georgie is joining the ranks of my favorite British sleuths.
150+ Challenge 52 books