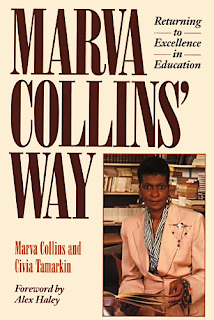 Marva Collins' Way, by Marva Collins and Civia Tamarkin
Other classical homeschoolers I talk with online are always recommending Marva Collins' books. This was the only one that was locally available. I was unfamiliar with Collins' name, and it turns out that back in the late 70's and early 80's, Americans were getting very worried about the state of public education. Collins became known as a teacher who was doing things differently; in fact, she was giving inner-city children a classical education. Marva Collins' Way is a sort of history of how she became a teacher and started her own private school, and what her methods are.
Collins did not start out to become a teacher, but found that she enjoyed the work. For several years, she worked at an elementary school in Chicago and had great success teaching children to read and work, but when the administration changed, so did the atmosphere at the school. Collins became more and more unpopular--she has an uncompromising personality and wasn't doing things by the book--and eventually left the school. She decided to start a private school for inner-city children, with very low tuition and very high standards. She took in mostly children who had gotten into serious trouble at their old schools.
Collins' methods involve intensive phonics, first making sure that every student can read fluently. She brings in historical and literary information all the time; students read literature, not selections from readers, and they study a lot of vocabulary. She also pays attention to every single student, praising them for their efforts. She walks around the classroom all day long, never sitting at a desk.

I was very impressed with Collins' methods and success, and there are certainly a lot of ideas I can use myself. Others were impressed too, in the early 80s. I think most of us wish that our kids could have this kind of a teacher. But to be honest, Collins demonstrates a level of energy and commitment that few human beings can attain while simultaneously having a home and family. Reading her book reminded me quite strongly of a more recent famous teacher, Rafe Esquith, author of Teach Like Your Hair is on Fire (though I did feel like he gets more into his own hype than Collins did).

I would love to see more of Collins' style of teaching in schools, and I plan to use some of it myself. I think we should ask for that to happen. Perhaps if there was the institutional support for it, we wouldn't need such heroic efforts from those few teachers who do have that kind of energy. Because if we're going to sit around waiting for an army of Marvas to save us, we're in trouble. Besides, she'd expect us to save ourselves.
150+ Challenge 52 books

Amy said…
I'd heard her name many times over the years, but I knew nothing specific about her methods. I love that she emphasizes phonics, making sure that every child reads fluently from the start, and high-quality literature early.
March 8, 2012 at 10:23 AM

Cassandra said…
Here in Austria education is a very sensible subject at the moment. For years our schools have decreased in standard and honestly most of the teachers don't care about their students very much.
Now they are launching a new final exam to raise the level of education again, but this can't work without teachers who are actually interested in their pupils.

Jean said…
Jenny, Collins ran her school for a long time, but shut down in 2008 from lack of funds. I suppose she's retired now.