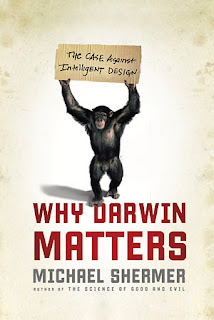 Why Darwin Matters: The Case Against Intelligent Design, by Michael Shermer

In the Evolution vs. Creation discussions, Shermer is a welcome voice of moderation (to me anyway). As a former Baptist, he has a realistic idea of what faith is about, and he thinks that respectful dialogue and debate--as tedious as it may be, what with the everlasting repetition--is better than insults and scorn, which usually fails to convince. (It generally makes me stubborn when people do it to me.) I accept evolution as a valid scientific theory and I teach it to my kids, but as a religious person I dislike the generalized insults that come from prominent skeptics like Dawkins and P. Z. Myers.

Because of that, I was looking forward to reading Why Darwin Matters. Shermer talks about the whole debate. He does not talk as much about evolution itself as I expected, though there is quite a bit of that. He spends at least as much time on why some folks do not accept evolution, why the creationist movement does what it does, and what its eventual goals are. He also talks about why he thinks that science and religion can get along just fine and that this whole debate is kind of unnecessary. In his opinion, "intelligent design" is bad theology as well as bad science--which I agree with, although sometimes for different reasons than he gives.

It was a pretty interesting book, although I don't always agree with his logic. On the whole I think he's got some very good points. So I was a little surprised that I didn't enjoy the book more, but I think I was expecting a little more about fossils and animals. I like fossils!

I'm counting this as the science pick for the Mixing It Up Challenge.


Also, I really am going to write up the Theban plays. Really! Soon!
Mixing it up