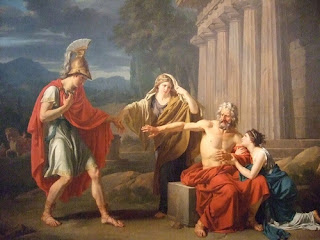 Oedipus at Colonus was Sophocles' last play, written shortly before his death and only staged posthumously.

Oedipus is now an old man, and his daughter Antigone acts as his guide. When he arrives in the village of Colonus and is informed that he is trespassing on ground sacred to the Furies, he knows that he has reached his refuge and asks to meet Theseus, king of Athens. The chorus figures out who he is, and is horrified, but resolves to wait until Theseus arrives before doing anything. Oedipus has now spent years paying for his unwitting crimes and defends himself, saying that he committed them unknowingly and killed his father in self-defense. He wants fair treatment.

Theseus welcomes Oedipus, earning his gratitude and an offer of a blessing. Oedipus knows that his burial-place will be a special spot, ensuring victory to the city that hosts his grave. Theseus is the deserving party, and Oedipus says he will never go back to Thebes, the city that threw him out so cruelly. Creon, the Theban king, has other plans and means to take Oedipus by force, but Theseus saves him and his daughters. Oedipus is already taking on aspects of otherworldly power, and he curses his sons and then leads Theseus away to find the ordained burial-spot. Antigone is left to make her way back home to try to stop her brother from attacking the city, but we know how that will turn out.

It was a really interesting play but I don't have as much to say about this one. I liked seeing Oedipus get some recompense for his years of punishment by Fate. Theseus is shown as an ideal king: just, majestic, powerful, and generous. At one point, Oedipus reaches out his hand in gratitude to him, but then snatches it back, realizing what he has almost done. He is so polluted that he cannot expect anyone to touch him, but Theseus courteously ignores the lapse.

That finishes off the Theban plays. Now I'm going to take a break from drama and read Herotodus' Histories, which I'm very excited about. I got this beautiful Landmark edition with explanatory notes in the margins, maps, pictures, and a staggering 21 appendices on various aspects of the ancient world. I think I will have to write a little post every time I finish one of the nine books, or you will never hear from me again. I was a bit tickled to see that practically the first story in the book is Solon visiting Croesus, telling him that you can never call a man happy until he is dead. One story Solon uses to illustrate the point is that of Cleobis and Biton, which I had never heard of until just a few days ago, when my little daughter and I read it in her Latin book. We were both very surprised when the boys died at the end.
Greek classics