The Romance of the Rose 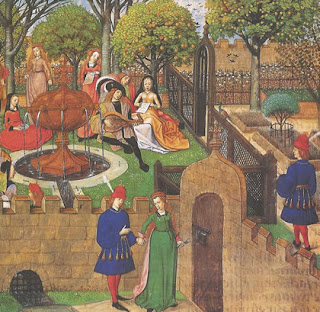 The Romance of the Rose, by Guillaume de Lorris and Jean de Meun

I said I would finish this book if it killed me, and it almost did, but not quite! I'm very glad that my edition translated the whole thing into prose, or the nearly 22,000 lines of verse might have finished me off. Thank you, Charles Dahlberg.

The first third of the romance was written by Guillame de Lorris in about 1230 and is quite enjoyable to read. It tells the story of a young man in love with a particular rose in a walled garden. The garden is populated by various allegorical characters like Fair Welcome, Jealousy, and Wealth, so the story is all about the lover's efforts to get the girl as he courts her. But when he gets close to the rose and importunately steals a kiss, rumors start to fly and the rose is sealed behind a castle built by Jealousy, Foul Mouth, and others who keep him from his goal. The first part of the poem ends there, and it's unclear whether Guillame meant it to end there or if he just died without finishing it.

Almost 50 years later, Jean de Meun continued the poem, adding more than twice as much material as had already been there. I am not a fan of ol' Jean. As the lover frets outside the castle, he meets different characters, all of whom have plenty to say. Reason is the first, and she tries to dissuade the lover from his allegiance to Love in an interminable monologue. Friend shows up and gives a lot of rather scurrilous advice (Jean manages to be both dull and bawdy). False Seeming, the Old Woman, Nature, and Genius all have their say at great length. It is all very much as C. S. Lewis described in that essay I like, with all the characters taking delight in discoursing on the nature of things in general whenever possible.

I can quite see why Christine de Pisan was so ticked off by the romance; Jean is quite the misogynist and spends a lot of time explaining how greedy, deceitful, and generally awful women are. This is quite convenient and justifies treating women badly. I'm very much looking forward to reading The Book of the City of Ladies as an antidote!
medieval