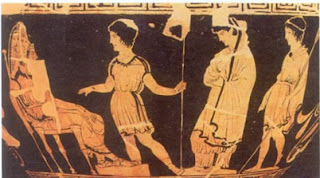 Antigone is one of Sophocles' early plays, and it's the first of the Theban plays that he wrote. Within the story of Oedipus, however, it takes place after the other two. I read it first because he wrote it first. I used the Fagles translation, and now I'm yet another fan; I liked his strong, somewhat plain style.

Antigone's brother Polynices attacked the city, and now lies dead on the battlefield. His uncle Creon is now ruler of Thebes, and has ordered that the traitor go unburied. Greeks believed that without proper burial, the spirit could not go to its proper place and be at peace, so this is an awful order, but after all the man attacked his own city. Antigone cannot endure for her brother to go unburied, so she sneaks out and performs the proper rituals although she knows that the penalty is death. Once caught, she stubbornly defends herself, insisting that the gods would be displeased by the crime of leaving Polynices unburied. Creon arranges for her to be shut into a cave, but his son Haemon (who is betrothed to Antigone) and the chorus finally convince him to relent. But it is too late; Antigone has hanged herself. Haemon cannot live without her and kills himself, and his mother commits suicide too. Creon is left alone, having lost wife and son to his stubborn pride.

A modern person can't help but like Antigone, who is an uncompromising young woman. She has one idea and she sticks to it; her brother must be buried, no matter what, and anyone who gets in her way deserves nothing but scorn. As soon as her more timid sister Ismene expresses her fear about the job, Antigone is done with her. Even as she goes to her death, she insists that she is right and Creon is wrong, and she never bothers to plead.

Antigone has had a terrible life, what with her family history and all, and now both her brothers are dead too. Although she is set to marry Haemon (which incidentally seems like a really bad idea, genetically speaking, since they're cousins and her mother was her grandmother), she does not seem to see any hope for her future. She has had nothing but suffering so far, and does not expect anything different.

At the final moment before she is shut into her cave, Antigone says something very strange: she drops her reasoning about the gods and what is right, and says that while she could not leave her brother alone, she would not have done the same for a husband or for her own children. Her parents are dead, so she'll never have another brother, but husbands and children are somewhat replaceable. This is very strange reasoning (by Greek standards too), but it also comes true--she really does give up her future husband and children by insisting on burying her brother. Haemon is right there, about to marry her, but she doesn't even care. I have no idea what to think about that, but it's certainly interesting to ponder.

If Antigone is admirable for her stubbornness by modern standards, she was a bit worrying to the ancient Greeks. No one in the play praises her for her stance, even as she tells them all about the right thing to do. She embodies a dilemma; when do family obligations take precedence over loyalty to the city, or vice versa? Creon puts the city first and ends up losing his family. Antigone puts family first, and loses everything else--and she can only look forward to meeting her family in Hades, which is pretty cold comfort to a Greek. The conflict between them leaves several people dead. It was a real question to the Greeks, and to many others throughout history, even if it feels removed from us.
Greek classics