The New Road to Serfdom 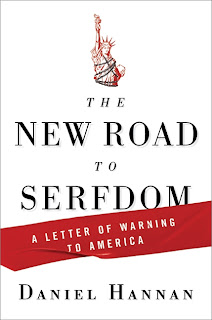 The New Road to Serfdom: a Letter of Warning to America, by Daniel Hannan

Daniel Hannan is the Member of the European Parliament for South-East Britain, and he's an articulate conservative who is especially passionate about localism and decentralization of power. He shows up on TV cable news shows every so often, so you might have seen him. Hannan felt that many Americans might not be aware of how governance works in the UK and the EU, and wrote this book to show where the US might end up if we continue to consolidate power at the federal level.

One of the first points he hits is how much British government is run by non-elected agencies now. I had no idea that UK citizens do not elect their local sheriffs or school board or much of anybody--apparently many local functions now operate through "quangos," which are state agencies run by appointment rather than election (this does explain something to me about why British home educators are so leery of their Local Authorities). It's entirely possible to have an illustrious political career in the UK without ever being elected to anything.

Most of the book is given over to explaining why Hannan is such a fan of localism. He feels that the more governance can be run at the local level, flexibly subject to local conditions and needs, the better. There is a lot about the EU and how it runs so much by government fiat, avoiding referendums whenever possible, and what the philosophy is behind that. He especially emphasizes that once you take any power away from a local body and give it over to a more centralized power, you are unlikely ever to get that power back--so watch what you're doing.

I found it to be a very interesting book that makes some excellent points. Hannan is a sharp and articulate guy. And I'll be paying much more attention to local elections from now on.

This book was on my TBR pile! Though admittedly not for long, since I only bought it late last fall. Still, it counts!
TBR challenge