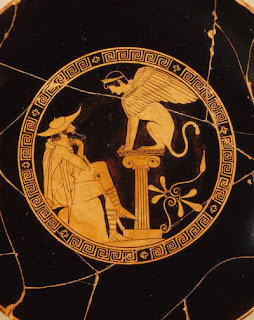 Yes, I am slow at getting these reviews out lately!

Let's find out a little more about Sophocles, shall we? He was a much-younger contemporary of Aeschylus and sometimes beat him at the competitions. Sophocles wrote a staggering 123 plays, nearly all of which are lost; we have seven complete plays. He competed about 30 times, won 24 of them, and never got worse than second place. He took innovation another step further than Aeschylus had done, adding another character on the stage and putting more into character development. Aristotle says that he also invented painted scenery.

Sophocles was a wealthy, educated man from the little rural town of Colonus near Athens. (Today it's a boring industrial suburb, which seems a pity.) He was born a few years before the Battle of Marathon, held some official offices, was very very famous for the plays, and had a very long life. His most famous Oedipal plays are not only not a trilogy, but were each written years apart as elements in four-part series of their own. Oedipus the King was highly regarded by the Greeks at the time, and Aristotle cited it as an example of excellence in high tragedy.

At the beginning of the play, Oedipus is at the height of his life. Anyone would admire him and call him fortunate. He's intelligent, majestic, and the epitome of a good king, having won the Theban throne years before when he vanquished the monstrous Sphinx and married the newly-widowed Queen Jocasta. Since then he has done his best for his city and ruled it with wisdom; every time someone suggests a course of action, he has already thought of it and carried it out. Now Thebes is threatened by a plague, and Oedipus has sent for advice from the Delphic Oracle. Whatever it takes to save Thebes, he's ready to do it.

The oracle has some surprising news for Oedipus; the former king's murderer is in Thebes and unpunished, and that's why there's a plague. All this time, it's been thought that Laius was killed by a band of thieves, and Oedipus curses the murderer and vows to punish him. But as he tracks down the evidence step by step, his whole life story is revealed for the first time; Oedipus himself is the killer, and Laius was his father. Oedipus has unwittingly committed the most horrifying crimes anyone can think of--he killed his father and married his mother, and he and his family are beyond the pale of decent society. Jocasta kills herself, but that's too easy a road for Oedipus' punishment. He puts his own eyes out and condemns himself to wander as an outcast and a beggar for the rest of his life. 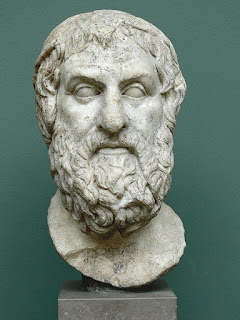 Sophocles uses this play to hammer home the message that the gods do matter, and one must pay heed to oracles. In his day a lot of people were questioning the value of oracles for the first time; up to then, oracles had been considered infallible and an important institution. Tradition held that an oracle (like the one at Delphi) was always correct--even if you interpreted it wrongly. Or there was always the chance that an official would take a bribe and produce a fake, but a real proper message from the oracle was always right. Sophocles upholds traditional belief with this story; Jocasta openly mocks the oracle and talks about how she and Laius got around it by exposing their son. Oedipus tried to run away from the oracle by exiling himself from his home city of Corinth (since he didn't know he was adopted). But the gods and Fate cannot be tricked or circumvented.

Oedipus committed his crimes unknowingly, but no one in the play seems to think that matters one bit; Oedipus certainly doesn't (until the next play). Whether he meant to or not, he and all his family are polluted beyond redemption, and he has no right to claim protection from any city.
The play ends with that most characteristic Greek sentiment--never call a man happy until he's safely dead:

People of Thebes, my countrymen, look on Oedipus.
He solved the famous riddle with his brilliance,
he rose to power, a man beyond all power.
Who could behold his greatness without envy?
Now what a black sea of terror has overwhelmed him.
Now as we keep our watch and wait the final day,
count no man happy till he dies, free of pain at last.
Greek classics