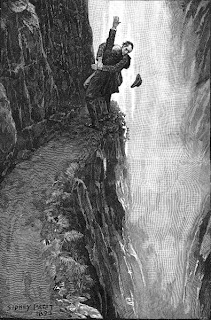 Great Stories by Sir Arthur Conan Doyle, selected by John Dickson Carr
Arthur Conan Doyle wrote about a squillion adventuresome short stories, and the best of them are collected together here. There are a couple of Sherlock Holmes tales, but the rest are stand-alones with the exception of one Professor Challenger story. Several are rather how I imagine Jules Verne stories must be, about fantastic adventures in the air or under the earth. Others are sporting stories about boxing and so on. I liked most of them.
"The Final Problem" is not included in this collection, but I read it too. It is the single Sherlock Holmes story featuring Holmes' intellectual equal, Professor Moriarty. Unfortunately, since Doyle really only wrote it in order to kill Holmes off, it wasn't all that interesting. Holmes talks a lot about the Napoleon of crime, but all that really happens is that Moriarty follows him to Switzerland and they disappear. It's pretty disappointing, but it counts for my League of Extraordinary Gentleman challenge.
League of Extraordinary Gentlemen Challenge