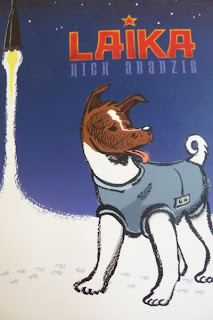 I didn't like this graphic novel about the most famous Russian space dog ever as much as I hoped to. It's pretty good, and interesting, but I felt like Abadzis tried a little too hard to pull on our heartstrings. And the art wasn't my favorite.

The story starts with Sergei Pavlovich Korolev staggering out of a gulag. He's been recalled to to Moscow to have his case reviewed, but only if he doesn't freeze on the way there. His determination and a little luck keep him alive, and we skip to 1957 as Sputnik is launched. Korolev is the director of the Soviet space program now, but he still has to do whatever Khruschev orders--and what Khruschev orders is another launch within a month's time.

After that there are quite a few flashbacks about the Soviet space program, and Laika is introduced. She gets a fictional backstory. It takes about half the book to settle down to a single timeline and start preparations for Sputnik II (which is Laika's flight). Abadzis puts a lot of emphasis on the caregiver's emotional turmoil and on how special Laika is so as to get the maximum number of tears out of the reader. I thought that was a bit overdone and it would have been more effective just to let the story stand; there's plenty of pathos and emotional difficulty as is.

Here is a photo of the actual Laika: 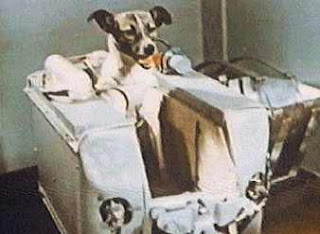