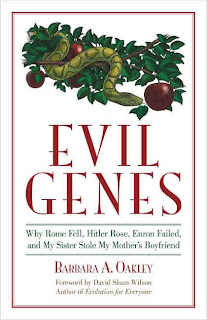 Why are some people so manipulative and rotten? What could be the causes of sociopathy, narcissism, or borderline personality syndrome? Inspired by her manipulative older sister (who really did steal her mother's boyfriend!), Oakley looks into the complex and poorly-understood reasons behind Machiavellianism.
The chapters alternate between describing cases of the "successfully sinister" from Mao to Skilling and heavy-duty neuroscience. Some of it is fascinating, and some is awful, and some is depressing. Oakley points out historical events influenced by Machiavellians; chaotic circumstances tend to allow them to rise to leadership positions.

For me, one of the major lessons in this book was this: "...emote control allows our best traits--love, caring, loyalty, and trust--to be used as manipulative levers....the successfully sinister have no compunction about using our best intentions to further their own purposes--and themselves. By believing a heartbreaking speech about how important it is for us to be treated "fairly," or a tale of how we've been victimized, or a plea to put our hearts and minds toward helping others, we may be doing our tiny part to stoke the fires and empower a Machiavellian. It is bitter balm indeed to learn how easily Machiavellians can use our own neurological quirks to fool us into actively working against the very ideals we hold most dear." (p.192)
52 books