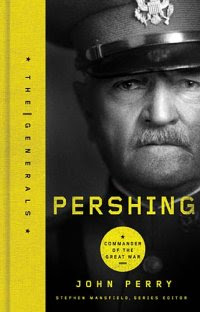 Pershing: Commander of the Great War, by John Perry (The Generals series)

General John J. Pershing is probably the most-forgotten eminent general in American history. Before I read this biography, I knew the name but could not tell you what he did--and yet he was one of the most famous men of the early 20th century, and the first man to be appointed General of the Armies.

Overall, the book is a good short biography, excellent for those of us who want to learn but don't want to tackle one of those 800-page definitive biographies. It's readable, flows well, and is suitable for adults or high-school students interested in history. I thought it was fair to Pershing; it didn't whitewash his flaws or blame him for being a human being.

The book mainly focuses on Pershing's career and family relationships. There's not much about his childhood, but his life at West Point and in the military before World War I is thoroughly explained, and really interesting to read. Pershing served in the West, learning to get along with Native Americans and Mexicans; apparently he was quite good at peacemaking and helping everyone live with each other. This experience served him very well when he was posted to the Philippines and expected to quell the Muslim Moro minority, which was inclined to fight the Americans as much as they had fought the Spanish. Pershing did his best to make friends with the Moros and calm the tensions in the area, and he was very successful. I enjoyed reading about all of that.

The second half of the book is all about World War I. In 1917, the United States joined the Great War, and not a minute too soon as far as the Allies were concerned; they were about to collapse. General Pershing managed to annoy the other generals quite a lot by insisting on keeping his army out of the field until they were trained, and refusing to fill in French or British lines with American soldiers. The generals' anger is understandable, but Pershing was right and it's not an exaggeration to say that his leadership was instrumental in winning the war. Without his organization and competence, I think it's quite likely that Germany would have won. I was glad to learn more about World War I; we never seemed to learn much about it in school, and I don't like reading about it because it was so awful, but we live now in a world shaped by what happened then, and we should study it more.

I would recommend this title to anyone wanting to learn about World War I; unless you're going to get far more in-depth than most people ever manage to do, this should be on your pile of WWI books. It's a good overview of Pershing's life.

I received this book free from Booksneeze in exchange for an honest review.
booksneeze

Jenny said…
Glad you liked it! Did the part about the Presidio fire get to you? It makes me sad just thinking about it.
January 4, 2012 at 10:19 PM

Jennifer said…
I liked this one pretty well, too. I can't believe our schools don't cover Pershing more, make sure that he's more prominently remembered.
January 21, 2012 at 8:38 PM

Jean said…
You know, considering we never seemed to get past WWI in school history, we should have learned more about Pershing all right. Well as a homeschooler I will make a mental note to cover him better when we get there (in the 2013-14 school year!).
January 21, 2012 at 11:07 PM