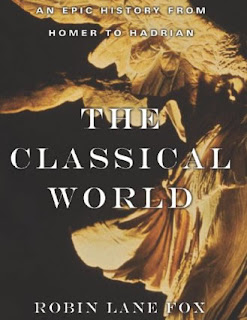 The Classical World: An Epic History From Homer to Hadrian, by Robin Lane Fox

This book has been on my mental wish list for a long time, but the length put me off for a while. Once I decided to run the Greek Classics Challenge, though, I thought I'd better brush up my history and prepare by reading it. And I've finished just in time!

"Epic" is the right word to describe Fox's book, which covers nearly a thousand years of ancient history. That amount of material requires an organizing element, and Fox chose to use the Roman emperor Hadrian as a frame and reference point. Hadrian's reign is the final event of the book, and he was an emperor with "classicizing taste." He traveled over the whole Empire and did much to promote the styles we think of as classical.

We start off with Homer, and the first third or so of the book is all about ancient and classical Greece. Then it's on to Alexander and the Hellenistic Age, and the Roman Republic, which becomes the Roman Empire. The fairly short chapters make it easier to read, I think. There is so much to cover: wars, political intrigue, all the different forms of government, and then there's literature, society, family habits, and everything else. It's all too much to really take in at once, but Fox does a pretty good job at helping the reader to digest everything and get an idea of what was going on.

It's a good book and worth reading, but I hope you have plenty of time to devote to it. Slow down and try to absorb the history; this is a book that can't be rushed.

And with that, it's the end of the year! So I hope you all have a great 2012 ahead of you. Tomorrow we get to start reading the ancient Greeks!
Greek classics