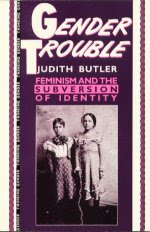 This book is famous for its impenetrability, and the reputation is deserved. Butler's prose will leave most people confused and frustrated, and that includes me. I am conceding defeat on this one; I got about halfway through it, and my ILL copy has to go back.

A fairly easy sentence taken at random from page 7 reads, "As a result, gender is not to culture as sex is to nature; gender is also the discursive/cultural means by which "sexed nature" or "a natural sex" is produced and established as "prediscursive," prior to culture, a politically neutral surface on which culture acts." The liberal use of quotation marks is a consistent feature of the book, since Butler is trying to question the meaning of all the words.

To me it read as a more opaque version of the kind of academic prose that seeks to impress readers through jargon. I'm not sure I buy the necessity of that kind of language. Too often it seems to be either padding, or covering up for a lack of clarity. Butler's claim is that her writing had to be extremely difficult to read in order to say things that ordinary language could not say, and in order to shake up the status quo. I am not sure I buy that either.

I wanted to read and understand the whole book, because it's quite an influential one. We are all living with a few consequences of Butler's ideas, so I want to understand where they came from. And besides, Butler is a professor in my very own academic program! Though I never took a class from her.

So, I lose, but at least I gave it a shot.
Feminist