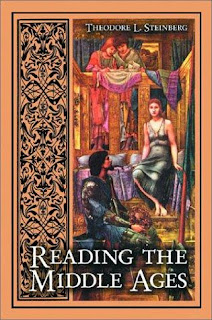 Eva at A Striped Armchair recommended this to me and I thought I'd try to get it read before I start the Medieval Literature Challenge at the new year. I'm glad I did, because this is a really nice useful book. Steinberg has written an introduction to medieval literature that hooks you in and makes you want to read the works he describes.

The first section is a general introduction to the middle ages, and it's quite good, avoiding too many generalizations. After that each chapter focuses on one particular work or genre. There is a good variety here; as expected, there are chapters on Beowulf and Dante and Chaucer, but there are also sections on Jewish literature, The Tale of Genji, and French women writers such as Marie de France and Christine de Pisan. (After reading two books in a row that talk about Christine de Pisan, I've decided that the universe really wants me to read her book. Message received, universe!)

Steinberg's main goal is to help readers realize that although the Middle Ages can feel very strange to us, its literature is still relevant, not that difficult, and most of all enjoyable to read. To that end he keeps it fairly light while explaining historical context and the issues writers were addressing--some of which sound familiar even a thousand years later. As far as I'm concerned he succeeded, because now I would like to read every work he discussed. So this was a great book to fire my enthusiasm for the challenge.

It's not a long book, and would be an excellent introductory volume for a college student preparing to take some medieval literature courses. I wish I'd had it when I was a student! Someday I would like to purchase a copy for my kids to read when they're older (the joy of homeschooling: making your kids read anything you think is cool!).

I do sometimes wonder, though, why so many publishers choose pre-Raphaelite paintings for the covers of books on medieval topics. This one is Edward Burne-Jones' King Cophetua and the Beggar Maid, and I'm not that wild about it. The story is a medieval legend, but is not addressed in Steinberg's book.

And for the record, my first pick for the Medieval Challenge is going to be Boethius' Consolation of Philosophy. It's all ready to go.
medieval