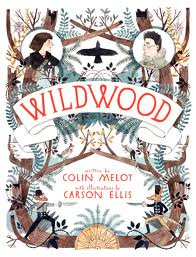 One day, Prue takes her baby brother Mac to the park to play, and is horrified when a murder of crows suddenly appears to grab Mac and fly away with him...to the Impassable Wilderness. Prue and her tag-along friend Curtis set out for the Wilderness to save her brother, but first they find a country in a state of war, an evil madwoman queen, and a lot of talking animals.

The story is set in a fictionalized (and either way in the future or alternate-universe) version of Portland's Forrest Park, and the geography is just the same. I had some fun studying a map of the real Portland and noting that the bridges and so on are put directly into the book. But in the story, the park is the Impassable Wilderness to outsiders and a small collection of countries inside.

The two friends lose each other right away, and each has an adventure to tell. Curtis' story spends half its time feeling too much like Edmund's in The Lion, the Witch, and the Wardrobe, but otherwise it's a pretty good read. The protagonists are twelve, and strong readers between 10 and 12 would enjoy this, especially if they are already fans of long adventure/fantasy novels. It's perfectly good for teens as well (though they might not want their friends watching).

Although the book is long enough to be a trilogy all by itself (it's nearly 600 pages), it's called Book I. The author, Colin Meloy, is a first-time author, but you might recognize his wife Carson Ellis' illustrations. Really they seem to have created the whole thing together, and the protagonists are somewhat modelled on them.

I thought it was a good read, pretty well-done, but not in the top tier of fantasy adventures.
52 books